You are here: Home / Apps / Chrome For Phones Getting A New Look? We’ve reported on a lot of updates, additions, and changes to the Chrome OS ecosystem but Chromebooks aren’t the only devices getting some UI tweaks from the Chromium developers.

In late May, we saw a new feature in Chrome Canary for Android labeled “Chrome Home.” The experimental flag essentially took the URL bar (Omnibox) and moved it to the bottom of the Chrome app on mobile devices.

Since that time, the Chrome Home feature has been enabled by default in Canary and is available as a flag in the Stable version of the app.

If you’d like to check it out for yourself, open Chrome and type chrome://flags in your browser. From there, click the menu button and select “Find in page” and search “home.” Click “Relaunch” and your Omnibox should now be at the bottom.

Now, it appears are giving Chrome Home a fresh, new look. A new flag entitled “Modern Layout for Chrome Home” will give your now upside-down browser a new look.

As you can see, the Modern Layout has a much more rounded look and the recent page icons look strikingly similar to that of the Launcher for the Pixel phone. This certainly looks and feels more native to the direction Google has taken with Material Design.

Oddly enough, this isn’t the first time I’ve seen this look on my phone. Over the past few month, at random times, my Google search results would return with a similar rounded look that I was unable to duplicate with subsequent searches.

Today, I lucked out and it happened again. So, I grabbed a screenshot to share with you that you may see the similarities between it and the Modern Layout for Chrome on Android. 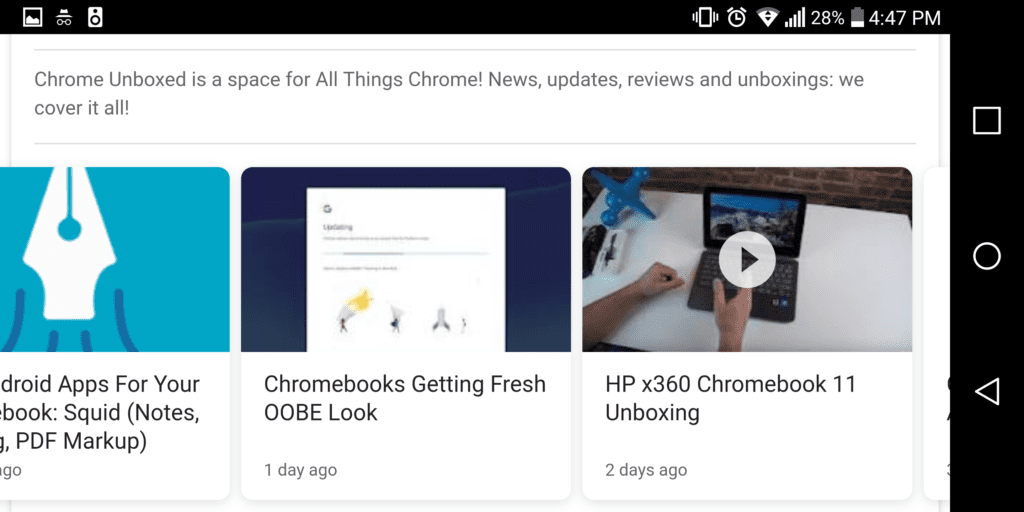 Have any of you stumbled upon these seemingly random new search results or is Google using me as a guinea pig? Personally, I like the new look. The rounded edges and whitespace-dominant design have a very modern feel to it.

I guess the name is a perfect fit.

If you’re interested in trying out the new Modern Layout, just head over to the Google Play Store and download Chrome Canary. Don’t worry, you can keep the Stable version as your default browser. Use the same steps from above to search for “home” in chrome://flags and look for the Modern Layout for Chrome Home.

Enable it, relaunch and off you go. iOS users, sorry, Canary is only available for Android. You’ll just have to wait to see if this feature makes it to Stable.

Let me know your thoughts. Do you like the new look?