You are here: Home / Chrome OS / Is Samsung Upgrading The Chromebook Pro? Samsung’s portfolio of Chrome devices is relatively small when compared to companies like Acer and ASUS but the fact remains, they have walked hand-in-hand with Google from the very beginning of Chrome OS.

One thing is for sure, the marketing power that Samsung totes is unparalleled. Combine the ground-breaking design of the Chromebook Pro/Plus and the clout Samsung brings to the table and the second largest tech company in the world isn’t under any pressure to pump out a slew of Chromebook models.

That doesn’t mean they aren’t going to give us more options.

The Samsung Chromebook Pro/Plus are by far the most advertised and critically acclaimed devices of 2017. Now that Android Apps are beginning to feel a bit more native on Chrome OS and Samsung’s stylus-equipped convertibles are taking advantage of all the dual operating systems have to offer, sales will surely continue to rise.

But what if Samsung was looking to up the ante?

We’ve been sharing some tidbits of information from the GFXBench website surrounding some upcoming devices and in our research, we came across a very interesting benchmark that points at the possibility of a new, upgraded version of the Samsung Chromebook Pro. 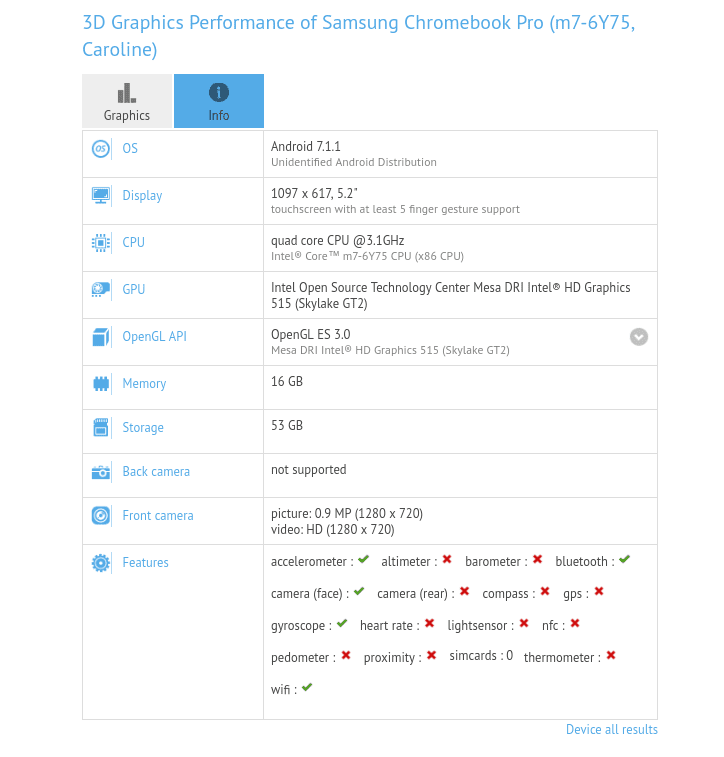 You can see from the GFXBench results, the device in question here is a Samsung Chromebook Pro code named ‘Caroline’. That’s the same board name as the current Chromebook Pro but take a closer look and you’ll see this machine has some major differences.

First, the processor. This Chromebook is powered by an Intel Skylake Core m7-6Y75. That’s the same chipset that you’ll find in the top-tier HP Chromebook 13 G1. That’s a big step up from the Core m3.

Next, we see a boost in the storage and the memory from the original Pro. This model has 64GB of drive space, double the current Pro. More importantly, the mystery Chromebook is rocking 16GB of RAM. Apart from a Pixel or the HP 13, this is unheard of in the Chrome OS market.

So, what’s Samsung up to?

Well, with the popularity of Chromebooks on the rise, Samsung may be rolling the dice looking to compete with devices like the HP Spectre x360 and others.

The other possibility is that Samsung is looking to cash in on Google’s latest Enterprise initiative. The Google Cloud Platform and the latest enterprise push is going to expand Chrome OS platform to countless new business infrastructures. The companies will need new devices.

A higher-end Samsung Chromebook Pro might look like overkill but for companies who are accustomed to dropping thousands of dollars per device, this could be the perfect computer.

At this point, you may be asking yourself, “why haven’t we seen reports about this new version of ‘Caroline’?

Like the HP Chromebook 13 and other Intel-based devices, variants of a Chromebook are built on the same platform. The different models share the same board name and therefore, don’t really take any new development. The baseboard supports the Skylake chips in all their forms so it becomes a simple switch to make an m3 Chromebook an m7. (sorry developers, I know there’s a tad more to it than that but you get the point)

If Samsung is making a core m7 Chromebook Pro this would be a huge development. From these benchmarks, it’s clear that somewhere the device exists. We will be doing a lot of digging to see what we can find out about this new Chromebook.