You are here: Home / Apps / ‘Open With Windows Application’ Shows Up On Pixelbook: UPDATED 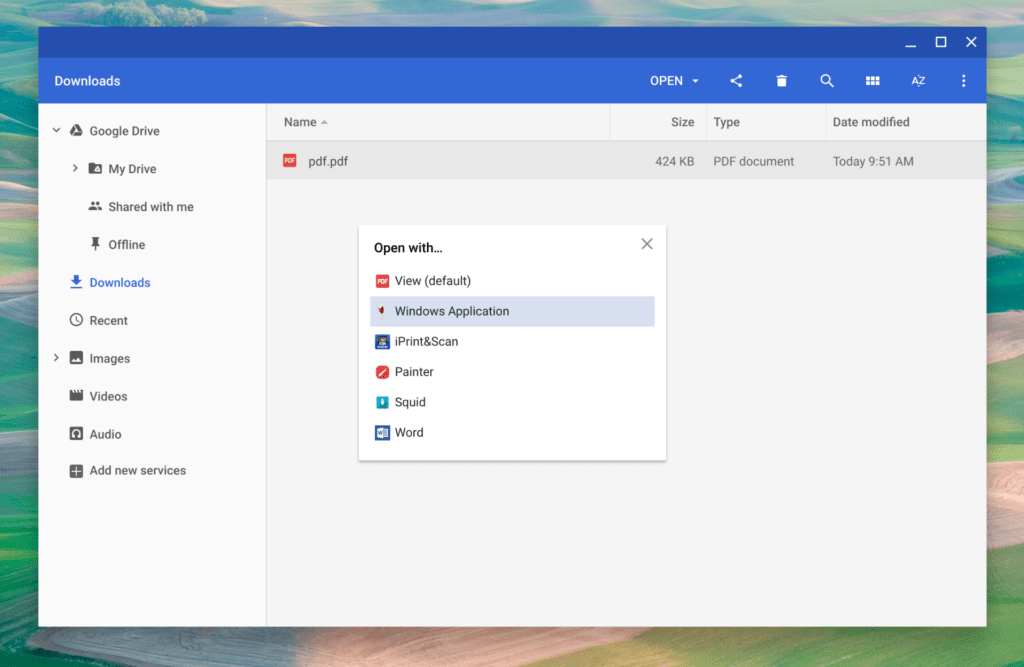 — UPDATE: 4/25/18 @ 3:11pm EST —
From time to time, we make mistakes. This one is on me. I recently powerwashed and fully reset my Pixelbook, and did not realize CrossOver was automatically reinstalled from the Play Store on my Pixelbook. I removed it prior, but the restart propted a reinstall upon my Powerwash. The WINE option mentioned in this article was coming from that app, not anything related to Crostini or containers on Chromebooks.

File this one under weird stuff happening in the lead up to Crostini’s full rollout. A reader has brought a strange, yet not-fully-unexpected feature to our attention, and it has ramifications for the future of Chrome OS, Crostini, and what it will be capable of.

First, let’s talk about what we’re seeing. If you have a Pixelbook, you can look at this for yourself with absolutely no setup, right now. Simply find a .doc file, PDF, or any other type of document, right click on it, and you’ll get the option to choose open with… in the menu. Choose that and you’ll be met with a few choices. Among those choices is a very interesting one…

Windows Application accompanied by a wine glass, which is the logo for WINE. What is WINE, you ask? Well, according to Wikipedia:

Wine (recursive backronym for Wine Is Not an Emulator) is a free and open-source compatibility layer that aims to allow computer programs (application software and computer games) developed for Microsoft Windows to run on Unix-like operating systems. Wine also provides a software library, known as Winelib, against which developers can compile Windows applications to help port them to Unix-like systems.

Put quite simply, WINE allows users running Linux to open and run Windows applications. From experience, it doesn’t work for everything, but it does do quite well for many things. Most helpful is the ability for WINE to bridge gaps found in workflows for many Linux users. For instance, imagine an employer requiring the use of Microsoft Word. This one thing could keep employees from adopting Chromebooks. If there was a simple, clear way to run it on a Chromebook, however, it could open the doors for Chromebooks for those employees.

This happens to be the exact scenario many people find themselves in. One app, one particular program that they need a Windows .exe answer to in order to get freedom from Windows as a whole.

It seems Google might be trying to make an easy way forward for those folks.

What Is Happening Here?

Right now, this doesn’t work at all. After all, we don’t have any Windows Applications installed, so there’s really no way to do this. Yet.

While I don’t have official info on this, my leaning is Google will have WINE as part of the Crostini experience out of the box. In that way, Windows apps that do work with WINE will be able to be installed via Linux containers that we know are coming soon. We don’t know what the UI will look like. We don’t know exactly what the user experience will be. But it seems Google is swiftly putting the pieces in place for containered applications to get up and running on Chromebooks.

I was fully under the understanding that we’d be able to run WINE if we so chose to, but I didn’t’ think Google would have this working out of the box. The inclusion of this option right in the Files app, right now tells me they are planning on making WINE a very normal thing in Chrome OS in the near future.

Just think, in the near future, you will have Chrome Apps, Android Apps, Progressive Web Apps (with Webassembly), Linux apps and Windows apps at your disposal on a Chromebook. Wild times, my friends. Wild times.