When some people think of Chromebooks, they immediately think of budget-friendly or perhaps even cheap. True, one of the greatest draws of Chrome OS in its infancy was the ability to get a capable device with a lightweight OS for very little cash.

As of late, the premium Chromebook market is seeing massive growth and consumers have been introduced to a wide variety of devices that carry price tags in the realm of competing Windows and Mac machines. Love it or hate it, devices like the Pixelbook, Acer Chromebook Spin 13 and Lenovo Chromebook C630 are becoming the face of Chrome OS and I would argue that’s not a bad thing. We can debate that at another time, though.

For users looking for the next wave of bargain Chromebooks, the landscape was getting bleak when manufacturers started launching $400 and up Apollo Lake devices for the education market. The handful of consumer Chromebooks we’ve seen lately are still coming in over three hundred bucks which makes it really difficult to recommend anything from the new generation. When you can grab a MacBook-like Acer Chromebook 14 for a tad over $200, the marginal performance boost of the Apollo Lake processor struggles to condone spending the extra cash.

The upcoming refresh of the Acer Chromebook 14 may well be worth the money thanks to the aluminum chassis and updated ports but you’ll still be spending nearly four hundred bucks to bring it home and that’s without the touch display. I think it will be a great device. Still, it pushes the border of what consumers expect when you say “budget-friendly.” 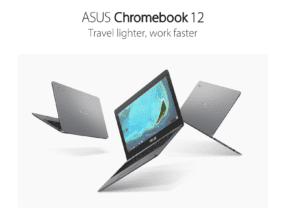 Leaked back in June, the ASUS Chromebook C223NA didn’t look like a device that would wow anyone but as Robby pointed out, the price would play a big factor in how popular the Chromebook would be.

The Chromebook 12 is now available and shipping from a number of retailers and ASUS has exceeded our wildest expectations on the price.

For $229, you can get a very sleek looking Chromebook that offers all the ports and features you’d hope to find in devices that cost $100 more. Oh yeah, did I mention it also comes in red? Check out the gallery below for a closer look.

Let’s take a look at what the ASUS Chromebook 12 has to offer:

Again, these specs aren’t going to give you the performance of a Pixelbook but, despite the plastic chassis, the ASUS is a good looking device. Plus, we’re only talking $230 here!

For someone looking for a capable device for daily tasks, media consumption or just a backup Chromebook, this one could be a winner.

The ASUS Chromebook 12 is available from Newegg, Amazon and BH Photo for $229. Don’t forget, if you order from BH, you get free shipping and no tax outside of NY and NJ. That will save you a few more bucks. Amazon is currently out of stock but you can order and it will ship when supplies are replenished.

If the red ASUS is to your liking, you’ll have to get it directly from the ASUS store. We’ll get our hands on this one ASAP and let you know our full thoughts after some testing.