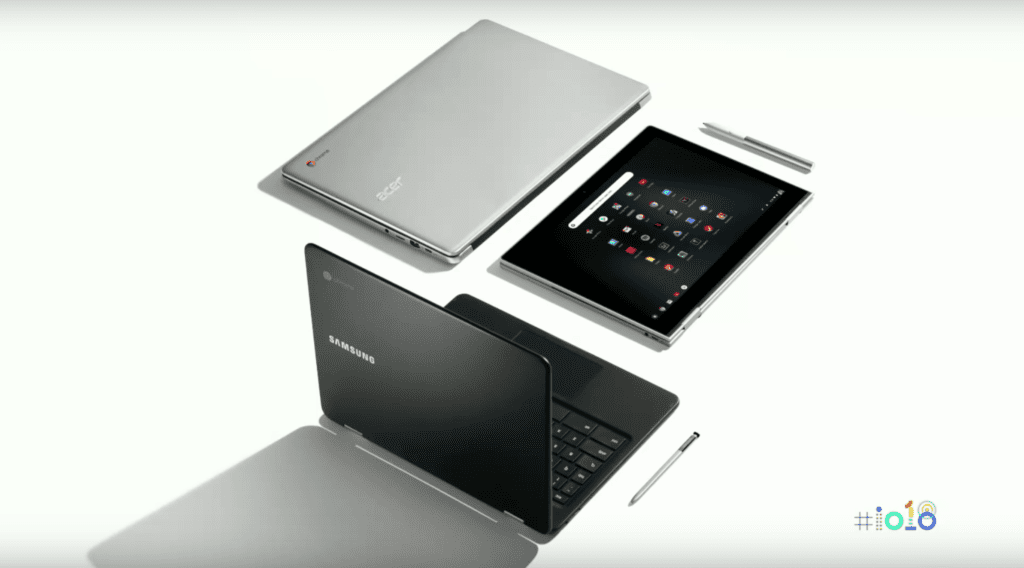 I honestly couldn’t even come close to getting all the new stuff on tap for Android apps on Chromebooks crammed into that title up there. The session earlier today during Google I/O was absolutely chock-full of announcements and features, so we want to get to all the good stuff.

As a lead into all this, we have to remember I/O is first and foremost a developer’s conference. I’ll drop the entire video down below, but there are parts of it that are a bit tough to get through. We’ll highlight the important stuff below, but before that, it is important to talk about some of the stats Google threw out at the beginning of the talk.

These stats serve one purpose: to help push more developers to pay attention to Chromebooks as an Android app delivery platform. First, they shared that Chromebooks made up 17% of all notebook sales in Q4 of 2017. Second, Evernote users are reportedly spending 4 times more time in the app on Pixelbooks than any other device. Last, Squid (the app I used to take notes on during the talk) made 21% of its overall revenue in the last 30 days from Chromebook users.

The lesson? There’s money to be made here.

Last year, we didn’t have these type of numbers for developers. Money speaks and development tends to follow the dollars. Now that we can show that there is value in making sure your app has a great Chromebook experience, my hope is we’ll see a massive uptick in overall attention paid to app development on Chromebooks.

With that said, let’s talk through the new stuff for Android apps on Chromebooks. I’m going to step through all this in the order it came in the talk so you can find your way through the video if you choose to give it a watch. Most of these new features are being promised by Chrome OS 69, so look for all this stuff to be live by mid-September, just in time for Google’s annual 10/4 Hardware Event.

Fittingly, Gabriel just did a demo and article on PIP working on Chromebooks just this week. Though he had to jump through some hoops to get it going, the end result was pretty cool. Shown in this talk, PIP operates as you’d expect and just the way it does on Android currently.

With this feature, videos embedded in websites or apps will get the PIP treatment when the window is minimized across all of Chrome OS.

I’ve long wondered why Google didn’t implement its very-well-made keyboard for Chromebooks. It seems they agreed that it was needed and are working to make it a thing by M69. The existing Chrome OS keyboard is old and doesn’t do many of the cool things that Gboard can.

Dropping this keyboard in place will instantly make tablet mode for Chromebooks much, much better. Better text prediction and more emoji/GIF/Bitmoji integration will make using Android apps much more fun and interesting. Notifications still have slightly different presentations between Android and Chrome OS right now. This is getting unified soon. Giving developers a cohesive set of rules for things like quick replies will help everyone get on the same page across the entire OS.

This isn’t a huge update, but more continuity is a welcome thing.

Chrome OS 65 ushered in full MIDI support, but many more audio upgrades are on the way. I’ll be honest, I don’t even fully know what each of these new additions are, but I’m hopeful they will help get Chrome OS to a place where performing/recording artists can use Chromebooks to make their music. The upcoming features include:

Again, I’m unsure what all that means, but it should make for better Android audio experiences across the board. If you’ve had an Android phone in the past year, you may be familiar with app shortcuts. Basically, when you long-press an app in your Android launcher (depending on your device), you get a few options depending on the app. With Allo, for instance, you can quickly message your frequent contacts or start a whole new conversation.

These types of shortcuts will show up alongside the standard close, pin to shelf, etc. that are already present when you right-click an Android app in Chrome OS.

We did a quick video a bit ago on paused state apps on Chromebooks. When apps stop working as you put them out of focus, it works for phones. On a desktop, though, users expect apps to keep running as they navigate away. Sure, apps like Squid or Keep can pause as you move away, but things like Google Analytics or chat apps need to keep running even when not in focus.

It turns out, from this talk, app developers will ultimately be responsible for these actions, and from the stage Google was urging developers to think about this for Chromebook users.

Drag and Drop in Android

File management in Chrome OS and Android has been hit or miss up to this point. One of the new features coming to Android apps on Chrome OS will enable draggable files from Chrome OS to Android with the option to carry along all the included metadata.

For apps that deal with file management, this will be a big deal and will again provide a massive step in the right direction for making Android and Chrome OS feel more cohesive.

This part gets a bit technical, but Google is providing the tools necessary for elements to show and hide upon resize. This is all very similar to the way media queries work in CSS for responsive websites, allowing devs to put elements in place and hide them depending on the size of the screen.

This is important because it allows app developers to add more useful elements to apps as the screen size increases for devices like Chromebooks. Instead of phone apps blown up on a big screen, this gives devs the tools needed to easily scale up their apps for bigger screens and take full advantage of the space provided.

The Pixelbook hit the scene with a low-latency pen, but there’s still room for improvement. Mainly, for Android apps, devs need a clear path forward for making sure Chrome OS pens work well with their apps.

The developers behind Chrome OS are now adding what they are calling an Ink Overlay for app developers to use to implement a faster, lower-latency inking solution. The standard pen latency tends to be around 100ms, and Google is contending that they can get that number down to almost zero with a combo of software tweaks and machine learning prediction.

I’m hopeful this will be a big update as many Android apps don’t do well with pens on Chrome OS. After Samsung promised great inking with Google Keep on the Samsung Chromebook Plus/Pro, I’m not holding my breath just yet. If the combo of software changes and prediction can give a better overall experience, so be it.

On stage, as they announced this, Google brought up a Marvel illustrator to draw Spiderman on stage. The display was awkward and quiet, but in the end, a professional illustrator drew a great Spiderman on a Pixelbook, so that seemed like a win.

Lastly, Android Studio was shown running a full-blown Chrome OS emulator. So for devs building apps on Mac or Windows, you can now emulate a full Chrome OS desktop and test your app in that environment. Even more, Chromebooks are receiving ADB debugging over USB for Android apps. For now, only the Pixelbook and HP x2 are supporting this, but it could feasibly move to more devices as well.

Lastly, with the new ability to run Linux apps, developers can run Android Studio natively on the Pixelbook, run and test their apps right on the same device. No emulation needed, no need to run the app anywhere else. This, to me, makes the idea of developing on a Pixelbook insanely attractive. Not only can you develop the app, you can test it on basically any form factor – including Chrome OS – right from the same machine.

Oh, and by the way, Google offered 75% off a new Pixelbook for developers at the conference, too!

Sure, it took 7 months, but I think we are finally realizing what the Pixelbook what partially created for. With all these tools at their disposal and some true monetary incentives finally in front of them, developers may finally begin thinking about Chromebooks as a target audience en masse. It has taken some time, but the next year of development could herald an Android app renaissance with top-tier app developers finally taking Chrome OS seriously.