You are here: Home / All Stories / Chromebooks: Why I’m a Believer 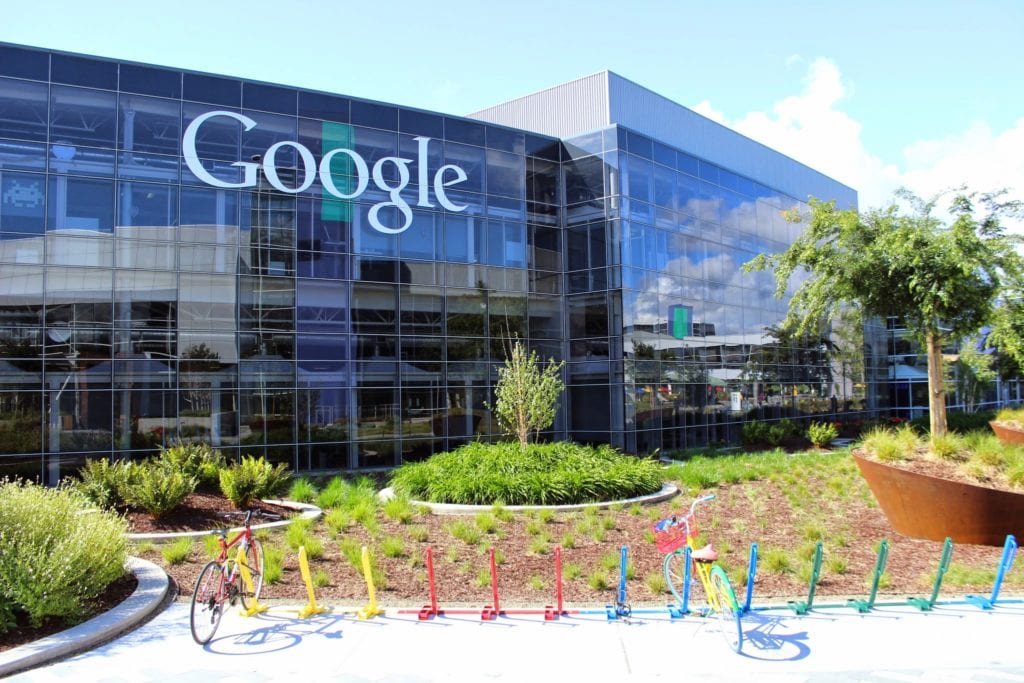 May I rant for a moment?

I will admit, a bit ashamedly, my first experience with a Chromebook was met with a fair amount of doubt and a dash of apprehension. At the time, I was working for a major Automobile group in Central Kentucky and was rarely more than an arms reach away from my Lenovo ThinkPad running Windows XP Pro. (This was in 2012 mind you) I had also recently acquired a shiny new iPad 4th Gen w/retina display, compliments of my employer. All of the tools a good consultant would need to get the job done. Everything worked. Unfortunately, none of it worked well.

Ten year old network printers, multiple email accounts for every employee and a plethora of legacy and antiquated devices all tied together by the industries newest, most robust web-based CRM software designed to make my job and my life easier. All-in-all it was a logistical nightmare. Aside from constant network and hardware issues, our new state of the art software depended heavily on Microsoft Silverlight which did not play well with Safari mobile on the iPad. But, at least I could spend some quality time playing Subway Surfers when traffic was slow.

Then there was printing. Or, as I like to call it, pin the tail on the Lexmark. Every week, without fail, printers would magically disappear from the network. I lost count of how many times we would get a call from another office letting us know they had a stack of forms that had inadvertently been redirected somewhere from the company infrastructure purgatory. Needless to say, our IT guy was a fairly stressed out individual. Don’t get me wrong, with the proper hardware and a sound network most of these problems would have been eliminated. But then again, that was a problem in and of itself. Everything was dependent on everything. This, all to establish a baseline as to why I was skeptical about trying out a new device like a Chromebook in an already unstable technological environment.

Fast forward two years. I had recently abandoned my iPhone for a Nexus device and wasn’t sure how I had ever functioned without it. I used Chrome and Google Apps for everything. But, still chained to my Windows ThinkPad, day-to-day computing was a labor at best. I could always go buy a personal device. The drawback there was, no access to our company infrastructure, i.e. printers, Outlook or inventory management due to “security reasons”. It was the 7th circle of technological Hades.

The summer of 2014 was also when I decided to start learning how to code and design websites in the hopes that I might be able to make a career change. It was an exciting, yet anxious time. Considering the fact that I was new to CSS, HTML, JavaScript and all the things that are web pages, I wasn’t convinced I would be able to succeed in an already saturated market of people half my age. But, with a little time and persistence I was able to become proficient enough to start picking up some work and actually found I enjoyed it way more than the Automobile industry. 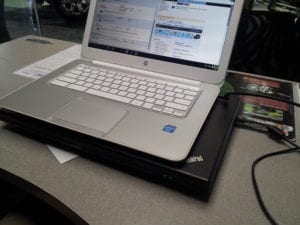 +Robby Payne, the founder of Chrome Unboxed, had already been doing unboxings and reviews on Chromebooks and devices since 2013. He asked me if I might want to take one of his Chromebooks for a test drive. My ThinkPad was struggling with even the simplest of tasks like syncing Google Drive and running ShiftEdit was virtually impossible. So, with hesitation, I said yes and he handed over to me his HP Chromebook 14. As you can see, my Lenovo made a perfect stand for my shiny new Chromebook.

Now, keep in mind, I was skeptical. I had heard all the noise about Chrome OS. It’s not a “real” operating system. Chromebooks are just glorified web browsers in hardware form. Chrome devices will never garner a major market share(ask MacBooks and the Education sector how that’s working out). I wasn’t about all of that. I was a huge fan of Chrome, Google apps, Android and everything they brought to the table. I just wasn’t convinced a Chromebook could thrive in industries that were so steeped in Windows and Mac OS. That’s where software designers focused their attention. That’s what the markets were built on and I just didn’t see how Chrome OS could gain a foot-hold in the “good ole’ boy” system. Then again, this is Google we’re talking about. They’re kind of a big thing.

We had a tent sale

Up to this point I can honestly say I was loving the Chromebook. As far as web design was concerned it handles my IDE like a champ. With Google drive always synced, storage was never an issue and the ability to share and collaborate made life very, very easy and helped in accelerating my expertise in my newly learned trade. What impressed me more was the everyday use at the car dealership. You can see in the photo above, I am in fact running a CRM software and it ran like a champ. While I couldn’t access my email from the HP due to company restrictions, my Nexus 5 handled that just fine. The only thing missing was the ability to print. And it wasn’t the Chromebooks fault. It was security issues inside the company that would not allow devices other than the corporate issued ThinkPads to access network devices.

Then it happened. We had a tent sale and needed to have a printer on site to write up deals and print paperwork. Dragging a 40 pound Lexmark outside and running a few hundred yards of Cat 5 cable didn’t seem like a real smart idea. So, our sales manager purchased a cloud-ready, Bluetooth capable printer(for a 1/3 of the price of the Lexmark I might add). That did it. That sealed the deal for me on Chromebooks. I could now print from my phone and access the printer from my HP. With the speed and ease of use of Chrome OS, I can say confidently my work efficiency was easily doubled.

It was then that it occurred to me, Chrome OS was never the problem. Honestly, it’s the solution. For years software designers have built their products on and around two major operating systems. That, combined with the ignorance of what a Chromebook can and can’t do are, in my opinion, the only things that ever held back these devices. Those days are quickly coming to an end. With the addition of the Play Store and Android Apps, software designers creating more cross-platform programs and the availability of quality, cost-effective Chromebooks, the tides are turning.

The Education market has already embraced Chromebooks and Chrome OS. With over 50% of the current market share belonging to Chrome devices,  Google Apps for Education have created an eco-system for teachers and students to have a seamless and secure, cloud-based learning environment at no cost to schools aside from the annual console management fee. Now we see major industries beginning to take on Chromebooks to replace paper forms as well as old network based computing systems.

Earlier this week CNBC reported that Charles Schwab has now come on board in adopting Chromebooks. A fortune 500 company, Charles Schwab is an industry leader and one of the largest banking and investment firms in the United States. They have recently implemented the use of Chromebooks in roughly 250 branches for customers to access accounts, fill out forms. When the customer logs off, their personal data is erased locally creating a secure interaction for Schwab’s clients.

This is a huge shift for Google and Chrome OS. As you can see in Robby’s video, Android apps are making their way to Chromebooks. And even on lower end devices, they perform beautifully. With access to productivity apps, games and everything Google Apps already offers, is there really anything you can’t do with a Chromebook? As developers begin to give more focus to designing Android apps and Chrome compatible, web based software, I think answer is no. But, that’s just my opinion. Can Chromebooks do in the business sector what they’ve already achieved in Education? I would love to hear what you think. Shoot us an e-mail or leave a comment below.