You are here: Home / Accessories / Chromebook Accessories: Google’s Got Jokes 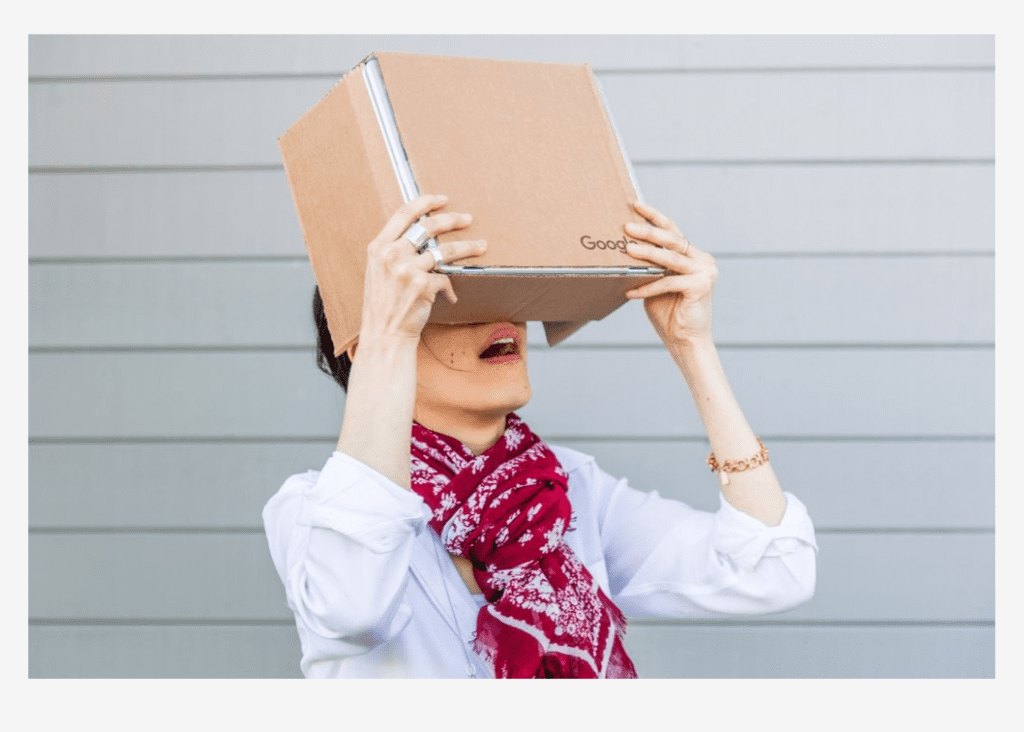 Google Cardboard for your new Samsung Chromebook Plus? Yeah, Google’s got you covered. Their new line of Chromebook accessories showed up on the Keyword Blog this evening and there’s really only one thing to be said;

In the spirit of the prankster holiday, Google has followed up the Google Gnome with some new Chromebook products that are meant to leverage the upcoming release of the Play Store to Chrome OS. While these products are clearly meant to tickle the funny bone, they carry with them a subtle message about Google’s dedication to bringing Android Apps to Chromebooks. We’ll get to that in a moment but first let’s all have a little laugh at these “next generation” Chromebook accessories.

The picture above show the evolution of our favorite budget VR viewer, Google Cardboard.

Just as affordable and just as mobile, this new version of Cardboard is your gateway to larger-than-life experiences wherever you go. You can turn any large appliance or pizza box into your own Cardboard device.

Now technically this would probably work but I feel silly enough sitting in the office with the stylish Daydream on my face. Knowing my cohorts are watching me as I’m off in another world just feels a bit awkward. A pizza-sized box on your face would be sure to enhance the inelegant experience. Your new Pixel or Samsung Galaxy S8 not capturing quite the selfie you hoped for? No problem. The new Groupie Stick will let you grab a pic of you and your friends all while easily viewing your shot on the crisp, 2400×1600 QHD display of your Samsung Chromebook Plus. (not to mention the forearm strength you’ll gain) Want to build your upper arms while getting in a light jog? Yup, Google’s thought of that too. With the new Workout Armband you can easily add 2-3 pounds of resistance all while enjoying your favorite playlist. (don’t forget to alternate arms to prevent unevenness)

Ok, this is all hilarious. Seriously, Google has really stepped it up this year with the Easter Eggs. They’ve even included links to the Google Store from this announcement. (products aren’t available in the Store, FYI). But, what’s more important than the humor at hand is the message this sent to me the moment I read it.

Chromebooks are blurring the line between desktop and mobile with the launch of Google Play store on Chromebooks. Our latest Chromebooks were built from the ground up with this technology. But until now, it wasn’t possible to appreciate the full range of experiences Android Apps can offer.

Despite any rumors of new operating systems that won’t be mentioned here and aside from the prolonged delay of releasing the Play Store to Chrome OS, this tells me that Google is fully and aggressively committed to bringing Android Apps to Chromebooks. The pending release of the Chromebook Pro, Chrome OS 58 and a number of new devices all landing at the end of April is a very, very good sign that the long road is almost at its end. That’s my two cents. Thanks Google for making light of yourself and keeping it real.

For some “real” Chromebook accessories, check out some of the products below.