You are here: Home / All Stories / Chrome OS 55 Begins Rolling Out For Chromebooks And Chrome Devices The latest version of Google’s operation system has begun making its way down the pipeline for Chromebooks and Chrome OS devices. Chrome OS 55 brings with it a few new features previously seen in the Developer and Beta channels. Following the release of Chrome 55 for Android, the update for Chrome OS devices will be finding its way to yours over the next few days.

First, we will address the question most of you are asking.

Some will be very disappointed to know that Chrome OS 55 has not brought us the addition of Android Apps to the Stable channel. But, if you are like us, you might be a little relieved to know that developers are holding back the much anticipated feature to ensure stability and compatibility with the millions of devices that will soon have the Play Store.

The reasons for the delay, in our opinion, add much weight to the argument that Google is intent on making the Android/Chrome OS experience a good one.

Now we can move on to the goodies.

If you frequent our site these features may not be new-to-you additions but they are now an official part of the Chrome OS ecosystem. All-in-all, Chrome OS 55 is considered a minor update and brings more enhancements to performance than actual features. All this preparing for what we expect to be a monumental update with the release of Chrome OS 56 in late January.

This one, at least around our office, is HUGE. From a web designer’s perspective, this option is a must and having it native to your operating system is a massive time saver. 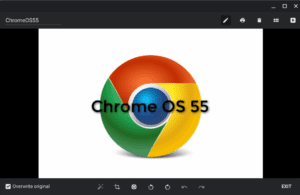 A built-in photo viewer that allows for cropping, resizing and minor image enhancements won’t be a replacement for a feature rich editor but often you just need to make an image bigger or smaller and now you can.

Many of the upgrades in Chrome OS 55 come in the form of behind the scene improvements.  Reduced memory usage via an update to the JavaScript V8 Engine has been touted to lighten the load on system resources as much as 50%. If this translates to the Chrome OS update you will surely see an increase in performance.

Chrome OS 55 was supposedly the version that would disable Flash by default for most web sights. However, it appears developers have held off flipping that switch for the time being.

Updates will be rolling out over the next few days. If you’ve yet to receive the notification head to settings>About Chrome OS>check for and apply updates.