It will also feature a PWA store, taking the Chrome Web Store's job

You are here: Home / Apps / “Chrome://apps” is getting overhauled to match the design of your Chromebook launcher First discovered by About Chromebooks, Google is working on a visual and functional overhaul to Chrome’s “Apps” landing page. When you visit “Chrome://apps” on Windows PCs, you’ll be met with a paginated library of your installed web applications. These can also be seen over on your Chromebook in the app launcher via the ‘Everything button’.

In its documentation for the update, the company states that it wants to place these on more of a grid with vertical pagination bubbles in the exact same way that said launcher works on ChromeOS.

Apps are scrolled page-by-page as in Chrome OS

Additionally, new right-click menu options are being added to PWAs found on this page. For example, you can quickly jump into a new Google Docs, Sheet, or Slide by calling up the contextual menu for that icon and choosing these options. Again, this works identically in ChromeOS and on Android devices. 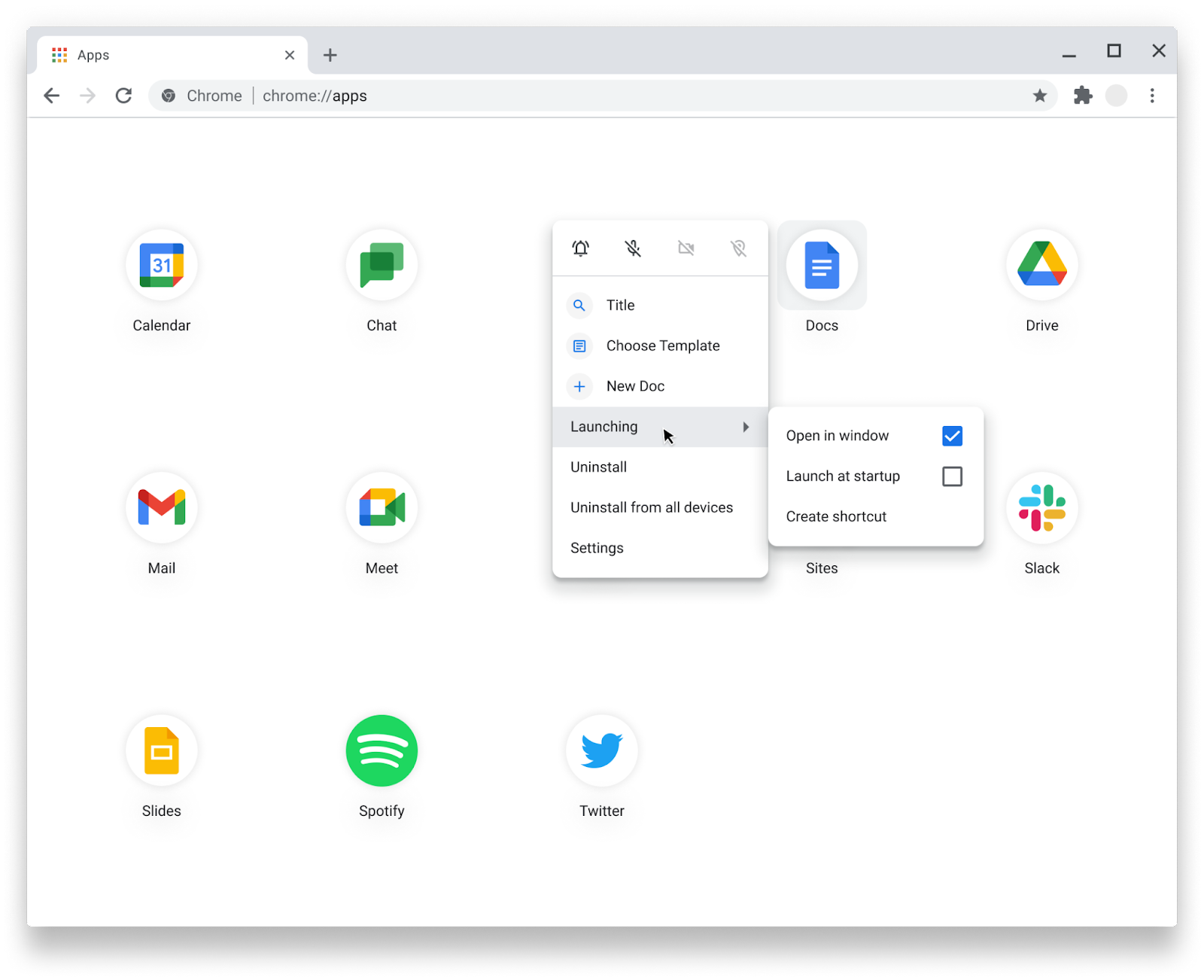 I’m personally a huge fan of this overhaul, but I am disappointed that it was removed from ChromeOS. Obviously, these PWAs are accessible via the aforementioned launcher, but having them directly through the web browser would be great for anyone who’s testing out LaCrOS or heavily using Tab Groups. I hope that in the future, Google brings back “Chrome://apps” for Chromebooks. In the meantime, this new design for Windows, Mac and Linux users is fantastic for bringing the user experience into alignment with its laptop OS design.

What struck me as most interesting, however, is this screenshot found below. What you’re looking at is a sort of discovery store for web applications directly on that Chrome apps landing page. You may now be saying to yourself – “hold on, Michael, the Chrome Web Store already features web apps that you can ‘install’ to your browser. Why do we need yet another?”

To that, I’ll say this – you’re absolutely right! However, I’ve spoken extensively in the past about Google’s desire to revamp or replace the Web Store in favor of sending web apps to the Play Store or by creating some new, cleaner, more trustworthy solution. Well, this looks as though it could be that very solution!

With just one click of the “install” button next to each icon and listing, you could add brand new web apps to your launcher or browser, and that’s awesome. Doing so through the Chrome Web Store right now means that you’re sifting through a bunch of extremely outdated, crappy web-based flash game sites, extensions, themes, and more.

This further solidifies my bet that Google will push discovery of PWAs to this new location as well as to the Google Play Store while considering where it will port browser extensions in a long term effort to nix the Web Store entirely. I still believe that the Google Store – yes, the company’s hardware sales store – will one day be home to themes, extensions, web apps, games and more as it seeks to kill off the Play branding.

We’re already seeing Movies and TV shows leap over to the Google TV app, Music left the store years ago in favor of YouTube Music, and I’m willing to bet that games, books, and audiobooks will all be migrated over to their respective apps in the future as well. With that, the only thing that will exist on the Google Play Store would be apps and web apps. I don’t feel as though that’s enough to warrant having a separate Play branding store location, and for that reason, I think it would make the most sense to drop all of this into the mix with its hardware under the umbrella of “The Google Store“.

Call me crazy now, but we’ll all be looking back on this in a few years realizing that I called it way ahead of time. Regardless, this Chrome Apps landing page redesign and discovery section get me extremely excited for the future, and I’ll be toying around with it as soon as I’m able.