You are here: Home / Gaming / PSA: Runescape is one of the best mobile games you should be playing in 2020 For the uninitiated, Runescape was the most popular browser based MMORPG of the early 2000’s. It’s made its way to a downloadable client as the game had become too high quality and content rich to run in the browser at that time. Heck, I still remember playing in Netscape before Internet Explorer was popular and yes, I’m showing my age. Well, the browser has obviously become much more capable of running high fidelity games, but Runescape still runs much faster and is compatible with more hardware as a downloadable client. That’s why it’s been ported to mobile!

While many thought the game to be on its dying leg, it seems to have found a more appropriate home on mobile devices and has been injected with new life and a growing user base for its continued success in the modern gaming society.

In Runescape, you build your adventuring avatar’s combat and non-combat oriented skills. You’ll complete rich and quirky story based quests for gold and items and slay ferocious and mysterious monsters in a large scale, unique world. You can cook, fish, craft, go mining, hunting, become a spell caster, archer, warrior, archaeologist and so much more. There are tons of skills that can be leveled up to 99 without a membership and even a handful of skills withheld for paying members too. Like I said, loads of content. What I love about Runescape is that it’s very much a medieval style mmorpg. It lacks any hint of korean RPG elements. While there’s nothing wrong with those, I personally find it more refreshing and interesting to play a game that’s based on medieval fantastical Western elements than Eastern ones.

With 18 years of content, Runescape is one of the very few tried and true traditional MMORPGs that you can enjoy for long hours or short sessions without paying in a marketplace full of gatcha and pay to win mechanics. This game prides itself in giving you years of fun without being forced to pay for microtransactions to make progress. Sure, the modern version of the game, simply called Runescape, has microtransactions (MTX), but as a player since year one, I’ll be the first to tell you that there’s plenty of content to indulge in for free. You could play this game almost endlessly on mobile without paying a cent. In fact, that’s exactly what I did for most of my time in Gielinor, the game’s sprawling, massive continent full of eccentric characters and exotic locations. You see, mobile’s very approach is meant to give players small bursts of gameplay without too much commitment and that’s why Runescape is the perfect game for that format.

Being that the game has a surprisingly enjoyable, grindy nature (which admittedly is not for everyone) it’s best played AFK. This just means that you do tedious, passive tasks casually in between other more important things in your life. Gaining a new life on Chrome OS and Android and iOS has made this game perfect fit for our modern computing lives of multitasking and short attention spans.

If the modern version of Runescape with all of its microtransactions is not for you, you can also pick up the original game on mobile too! OSRS or Old School Runescape has none of that, though you do miss out on the amazing upgraded graphics, soundtrack, user interface and more.

For many of us, especially mobile gamers, computing habits no longer truly reflect sitting down for hours on end to play a MMORPG. I’ve found that you can get the most value out of Runescape in 2020 by making goals and sticking to them or following your quest guide. If you don’t, you may find yourself logging in, being overwhelmed by the sheer amount of content and freedom and logging right back out again.

In recent years, Runescape has done a lot to get people interested in it again. As you can see from the video below, many of the game’s core systems have been completely reworked and they’ve even added several skills, including Archaeology. I’ve been having a lot of fun with this one and I recommend you try it out! They’ve also added entirely new islands with unique content like dinosaurs and more stories too, like Darkmeyer: The Bloodstained Path which focuses on the Vampire city of Morytania.

Many of you reading this are thinking to yourself, “I remember that game! I made a character back in middle school and played non-stop, even during classes, but it’s basically a joke nowadays, right?” Well, I think you’ll be surprised to see that if you you give it a chance it could offer you a greater value proposition on the go than it would on your desktop. So try it! Heck, your old character may still be accessible. Simply head on over and install the game and try to sign in.

Membership is $12.99 per month if you get sucked in and want to explore the deeper content, but I don’t think you’ll need to for many years. Old School Runescape has been available on the App Store and Google Play for some time now and Runescape Mobile (the newer version of the game) recently became available to all Android and Chromebook owners with no membership needed. Apple users will have to wait for the upgraded game to come out of a closed beta, but Jagex, the game’s developers, just opened it to more players last week, so it’s only a matter of time.

As for me and my house, I’ll be playing the game on max graphic settings on my new Lenovo Duet. I won’t be buying any micro transactions, and for all of its flaws, I think the modern version of the game is more well suited for mobile than the classic. Its ‘hand-holdy’ nature and step by step guides in the UI for quests and challenges and the music, story and graphics all appeal to a busy dad like me who is more than willing to put away nostalgia for a well-polished experience in between the busy parts of my day.

Runescape reminds me of movie critics and reviews. For most movies that they speak negatively about, I end up thoroughly enjoying. It just goes to show that personal taste and opinion are just that. Taste and opinions. Besides, ‘movie critics’ not picked for their excellent judgement and expertise in movie watching, but rather for their diversity in taste and demographic – just like gamers. While this game is not for everyone as it’s extremely grindy, (that’s why it’s good) many will find it refreshing and many others, maybe, just maybe including yourself, will be surprised by what it has to offer. 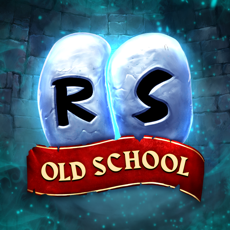