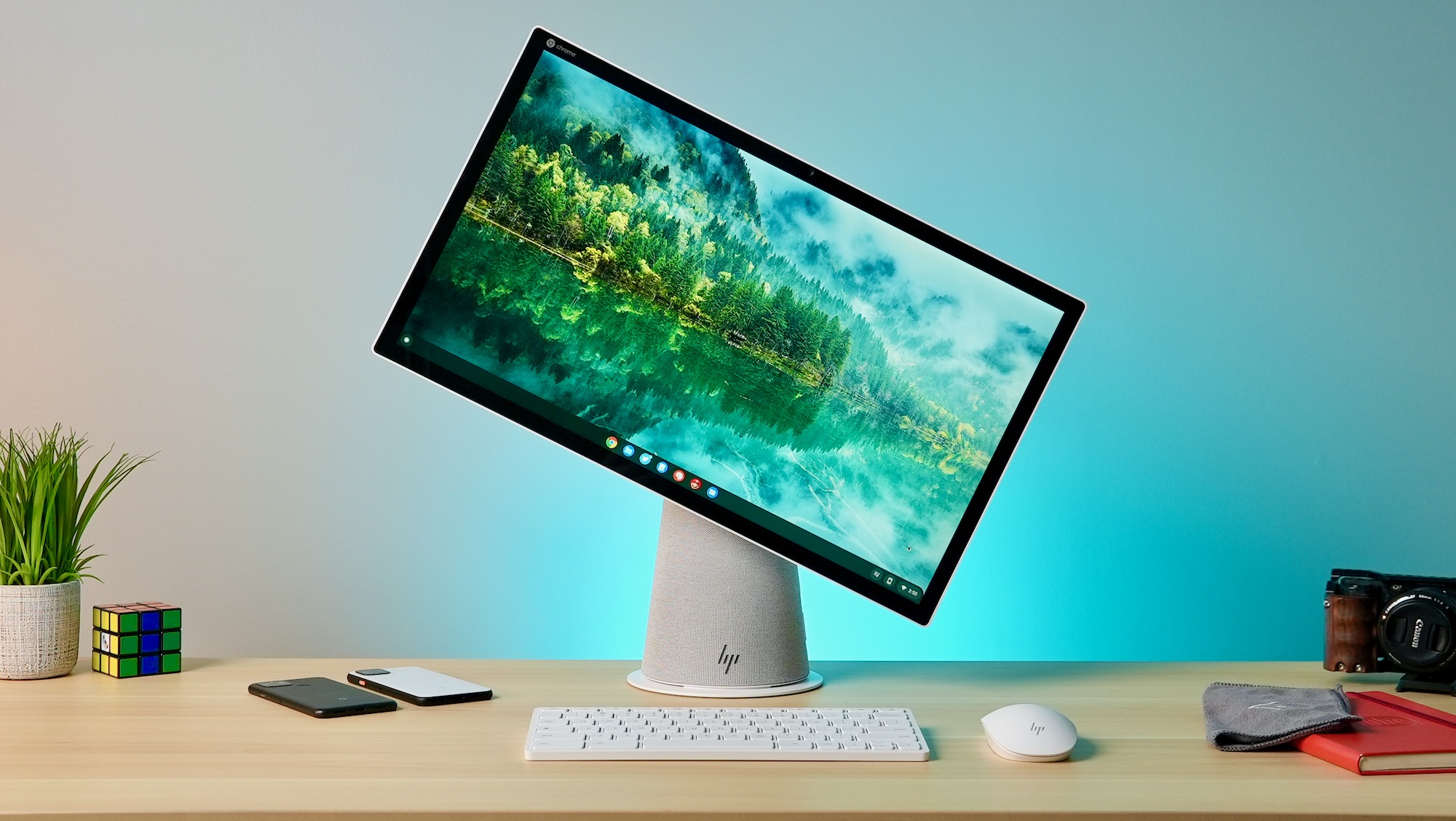 I suppose it’s true in every tech category – iterative design changes lead to boring products given enough time. Look at our phones. Seriously, take the phone out of your pocket and compare it with the phones you see in stores or in commercials. It’s basically a black rectangle with some cameras on the back, buttons on the side, and an edge-to-edge screen, right? That’s not a bad thing, per se, but we are definitely past the point where a major smartphone release sparks the imagination these days.

The same thing is starting to be true of Chromebooks and Chrome OS devices in general. The stuff we cover here at Chrome Unboxed has moved into what I would consider an iterative phase. We get small changes that, over time, make for better products. They aren’t blowing us away with new features; they are simply getting better with each step forward. I’d argue that this is generally a good thing, but it is nice to get refreshing new ideas from time to time, too.

And that’s just what we get in HP’s new Chromebase with the spinning display, striking design, and clean aesthetic that – quite literally – turns the Chromebase form factor on its head. It’s a unique device in a sea of similar Chrome OS hardware, and I think it is well worth your attention. Let’s take a look.

We’re going to start this review a bit backwards – from the inside out. Let’s be honest: processors, RAM, storage and ports are not exactly breakthrough features. There are so many interesting things happening with this Chromebase that it makes sense to simply get the more pedestrian parts out of the way from the start.

Inside, the HP Chromebase 22 is outfitted with either a 10th-gen Intel Pentium Gold or Core i3 processor, up to 16GB of RAM and up to 256GB of internal storage. Wi-Fi 6 and Bluetooth 5 are on board for connectivity, too. For the record, the model we’re testing has the Core i3, 4GB of RAM and 128GB of internal NVMe storage. With a 1080p screen (we’ll talk more about that in a second), this thing performs just fine and handled my daily workload with only a hiccup here and there. I’d imagine 8GB of RAM would go a long way towards helping that out a bit, but I really had no complaints, here. Performance was great and since this is a desktop setup, battery life isn’t really part of the equation at all. Put it this way: this thing was my go-to work from home device during my stint with COVID-19, so I legitimately put it through all the paces and it kept up just fine.

The star of the show is the screen

If you’ve seen anything about this Chromebase, you already know that the 22-inch touchscreen is the main attraction. After using it for a bit, I’d argue that it is great, but not for the reasons you are thinking it is. Yes, the display rotates 90-degrees for applications where it makes sense, but in actual use I didn’t leverage that very often. While I do think it is a neat trick and likely very beneficial for certain users, I simply didn’t find a ton of real-world application in it. I think in a house or as a kiosk it could be awesome, but on my desk as a work machine the screen generally stayed put.

But that’s not a bad thing. For a screen who’s main draw is a rotation trick, this panel really impressed me. Though HP still lists this screen as 250 nits, that isn’t the case with our review unit. It easily tested over 400 nits and even right next to the window on a sunny day, the screen is completely comfortable to use. Colors pop, viewing angles are great, and the size is large enough for me to not feel the need to lean forward to see stuff on my screen. The bezels are under control and overall the display on this Chromebase was just fantastic to look at day in and day out. I really, really like it. If I had one gripe it would be the resolution. 1080p at 22-inches is pushing it and I could pick out pixels from regular working distances. It’s not a deal breaker, but a QHD screen would have gone a long way, here.

Now, it is a rotating display, so we also have to talk about the hinge/joint thing that attaches it the base. The rotation happens so easily while keeping a sturdy feel that you almost have to try it to understand. As my kids would say: it’s just satisfying. There’s also a bit of tilt available as well that helps ward off glares from lights and windows if you need it. It doesn’t shift a ton, but it’s been enough to keep things comfortable while I’ve used it. While I wish there was a height adjustment here as well, I didn’t really feel the need to move it up or down during my use, so I’ll give HP a pass on that one.

Above the screen we get another cool trick in the front-facing 5MP camera. First, this resolution is much appreciated in an ocean of Chromebooks with 720p webcams. The colors aren’t perfect from the sensor, but I feel like the higher resolution at least gives applications like Google Meet or Zoom a bit more information to use before that massive compression happens.

The real trick here is the privacy slider that is part of the Chromebase’s top bezel. Click it once and you have your camera covered. Keep pushing and click it again and you disable the mic. They even have a toast notification built in that tells you the mic has been disabled. It’s a handy trick for sure and one that will continue to add value to this Chromebase as we continue slogging through this pandemic. I took a few calls with this setup and I really liked the ability to have a manual switch that assured me my camera and mic were both off. I know you can do this via the software, but this implementation feels more sure; more definite.

Behind the display and it’s collection of tricks and features is an unassuming cone that houses all the internals. The recycled cloth cover screams Google and the gray and white aesthetic is flat-out good looking. One of the most impressive parts of this section of the Chromebase is the set of loud, full speakers it houses. There’s no doubt that this is the best overall audio you can get on a Chrome OS device. They really pump out the sound.

The power button and volume rocker are also located on the side and back of the base and while I’d rather see them on the side or bottom of the screen portion, they work just fine in those positions. Additionally, all the ports – 2 USB Type C, 2 USB Type A and the headphone/mic jack – are in a narrow line up the back of the cone-shaped base and it all just feels so considered. This Chromebase isn’t an afterthought or a compromise. It was made with care, thought, and purpose and at every point you can see it. Even the bottom of the base is raised just off the surface so that small spills aren’t an issue, either. Check it out in the video above. We tested it and for minor spills, it does the trick!

In the box you get a Bluetooth keyboard/mouse combo that is certified Works with Chromebook and while the mouse is just average, the keyboard is fantastic. Both paired up right away and I’ve not had a single issue with connectivity since I started using the Chromebase. I’d say that if HP decides to sell this keyboard as a standalone device down the road, I’ll buy one almost instantly. I’ve really enjoyed typing on it.

If it sounds like I’m a bit head-over-heels for this thing, I absolutely am. I love the look of it, I love actually using it, I love the sound, the spinning screen, the keyboard…I just love this Chromebase. I think it will make a great device for home offices, standard offices, kiosks, libraries, schools and everything in between. I sincerely hope HP is already at work on iterating this design with either an 11th-gen or 12th-gen Intel processor inside, but I’m completely happy with what this already is right here, right now. Starting at $549 for the Pentium Gold model, it’s also priced the right way to sell very well, I think. HP’s website tends to really overprice things when you customize a Chrome OS device, but we found that you can upgrade the Pentium model with 8GB of RAM and 256GB of storage for just $599, and the Core i3 models stay realistic at around $750 for all the upgrades (Core i3 with 16GB RAM and 256GB SSD).

All told, HP has absolutely nailed it with this one, and I’m frankly happy to see it. As the world’s top Chromebook maker, it’s important to see them not just making better Chromebooks, but stretching out to make more interesting Chrome OS devices in general. Between this and their well-crafted X2 11 detachable tablet Chromebook, I love what HP is bringing to the table right now and I can’t wait to see what’s next.

Buy the HP Chromebase 22 from the HP Store