You are here: Home / All Stories / Chromecast Support Comes To Cartoon Network App

The ability to share my favorite apps with my Chromecast is becoming so common I almost expect this feature to just be there. One particular application, however, has surprisingly lacked the support. That is, until now.

Cartoon Network recently updated their mobile app and have added native support for Chromecast. Now I can share my favorite episodes of Adventure Time with everyone in the office with just the simple click of the Cast button. 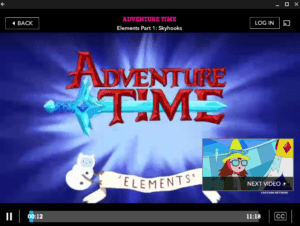 The update rolled out last week along with the announcement from Cartoon Network.

Like most network apps, you will have to log in with your cable provider info to access all the features. But, there are quite a few free episodes available of some the CN’s most popular shows. You can grab the Cartoon Network App for the Google Play Store.