Installed and pinned directly from the Admin Console 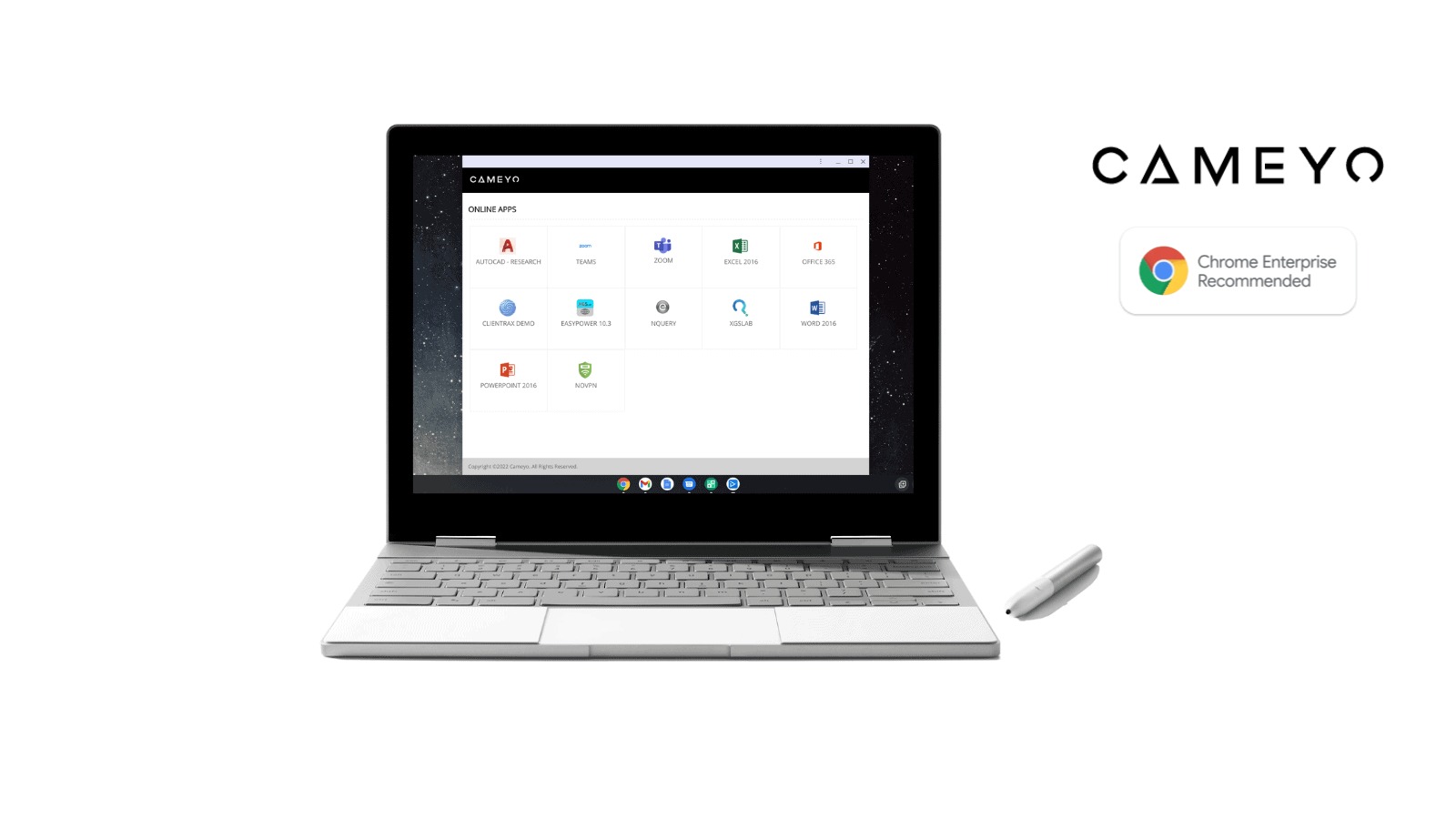 Just last month, Cameyo joined Google’s list of Chrome Enterprise Recommended platforms for virtual app delivery on Chrome OS. In contrast to counterparts such as VM Ware and Citrix, Cameyo delivers individual Windows applications instead of a fully virtualized Windows desktop. This keeps the virtualized environment lightweight and allows for more flexibility on the administrator’s side of things. Each Workspace user gets access to his or her own customized dashboard with the applications needed to bridge the gap between Chrome OS and legacy software needed to get the job done.

This week, Cameyo is taking things one step further by introducing Windows applications as PWAs or Progressive Web Apps. I had the opportunity to sit down with Cameyo’s CMO Robb Henshaw and chat about the new feature. The process takes less than five minutes and it allows admins to instantly create and push the web-based PWAs to Chromebooks on a per-device basis or in bulk. This will not only streamline the app delivery process but also create a more native app experience for the end-user as the applications can be pinned to the Chrome OS shelf out of the box.

Virtual App Delivery (VAD) has already gained significant traction as a simpler, more secure, and less complicated way to deliver apps to people regardless of where they’re located or what device they’re using by making the full desktop version of any app available in the browser. Cameyo’s ability to deliver any app as a PWA takes things one step further and makes VAD invisible to the end-user.

Since the Windows applications from Cameyo are being served virtually, any app can be turned into a PWA using the standard method available in the Chrome Browser. (Three-dot menu>More Tools>Create Shortcut>Open as window) Admins can now do this from the backed end directly in the Google Admin console. When an application is added to the Cameyo dashboard, a corresponding URL is created for the app. Admins can then navigate to Users and Browsers in the Google Admin console and add the application using by adding an application by web location and pasting the newly-created URL to the app list.

Once added, admins can opt to open the application in a separate window instead of the standard browser view. Then, under the installation policy of said application, admins can force install the application and have the app automatically pinned to the Chrome OS shelf. When a user logs in with their company credentials, the application will be on the shelf, ready to use and it will open as a PWA which will make it look and feel much more like a native Windows application. Here’s a quick overview from Cameyo.

In a world where the cloud is king, Cameyo is bridging the gap for many that still need access to legacy Windows applications. Presenting these applications to employees as native tools is imperative to save precious time and money. That’s exactly what Cameyo has done and the new PWA installation feature should only aid in blurring the lines between local applications and cloud-based solutions. I’m going to spend some time in the Cameyo dashboard this week and we’ll have some walkthroughs and how-tos coming your way very soon. If you’re looking for a virtual app delivery solution for your Chrome OS fleet, you can learn more about Cameyo here.