You are here: Home / Chromebooks / Back To School Chromebook Deals 2018

For some, like us, the 2018-2019 school year is underway. As more and more students head back to the classroom, the time to grab a new Chromebook is now and we’ve got some deals to save you a little dough.

Google’s flagship Chromebook has been consistently on sale via Amazon for the past few months with prices fluctuating between $750-$850 depending on the day. In response to Prime Day, Google dropped the price on the base model Pixelbook to $749 but it quickly returned to $999 after the online shenanigans came to an end.

Amazon and the Google Store are both selling the Core i5, 128GB Pixelbook for $749 which will save you $250 on what is still the best Chromebook available so far this year. Where you buy is totally up to you but, if you’re looking to pick up some accessories, Amazon is the way to go.

Google and Amazon will both give you free shipping but the Pixelbook pen is discounted $17 and you can grab an extra charger for a dollar less than the Google Store. Many of you may not need an extra charger laying around but for those who use their device as a desktop station, it’s nice to have the second power supply as a static fixture at your desk. Bundling all three will still put you about $190 below the MSRP of the Pixelbook.

The Core i5 256GB and Core i7 are on sale at Amazon as well but you won’t save quite as much.

I know, the Pixelbook may be more than most students need but for college kids that may be considering a MacBook, this could be a great alternative that will save you some major cash.

For the K-12 kiddos, Acer has shared some great deals on some of their most popular devices that you can pick up from some familiar store you might already shop. 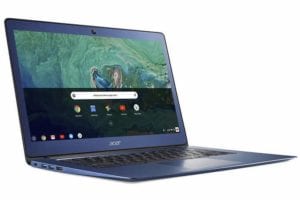 The convertible Chromebook from Acer has gained an almost cult-like following thanks to its portability and relatively low price. The latest model is literally a reskinned version of the popular device that adds an aluminum top cover and cool blue “nano-imprint” texture.

Regularly priced at $279, Walmart has the Acer Chromebook R11 on rollback for $239. For your dollars, here’s what you’ll get:

One thing to keep in mind, this may be a refreshed version of the original but the baseboard has not changed. What that means for you is that the End of Life is still based on the original R11. This Chromebook will continue to receive updates until June 2021 at the least. Three years isn’t great in comparison to the six and a half years of a newer device but for the money, this is still a good deal on a great Chromebook. We’re still rocking the OG model at our house.

You can order one today and even pick it up at your local Walmart if you so choose. While we’re at Walmart, one of my all-time favorite machines has been rolled back $80. The Luxury Gold Chromebook 14 may be getting up there in age but it is still unmatched in the looks department. The gorgeous all-aluminum chassis with Full HP 14″ display screams premium and you won’t be disappointed when you’re typing on this thing.

For light to moderate use, I still highly recommend this Chromebook and at $219, it’s a steal.

I will take this opportunity to apologize to Intel for the repeated bashing of the Apollo Lake lineup of processors. While I still would not buy a device with the Braswell successor, I have been reviewing some EDU devices with the N3350 and N3450 chips and I have not given them a fair shake.

As an educational or even an average user device, a Chromebook with the Apollo Lake chipsets are ample enough to handle daily tasks with ease and as long as the price-point is good, they’re not a bad buy.

Today’s Apollo Lake deal is more about the overall device than it is the computing power inside. The latest iteration of the Acer Chromebook 15 ups the ante with a partially aluminum chassis while keeping all the things that were great about previous models. Two of which are the massive 15.6″ HD display and segment-best upward firing speakers on either side of the keyboard. Sans the processor, this device is identical to the one Robby reviewed back in March. It’s a beautiful machine with tons of desktop real estate and at $100 off retail, it would make a nice addition to any desk whether home or office.

Target has the exclusive deal available online and in the store where available.

Don’t see anything that tickles your fancy? Make sure to subscribe below for all the latest news, reviews and Chromebook deals from Chrome Unboxed.