I really wasn’t sure what to expect from IFA Berlin this year. Last year, the annual consumer electronics show brought us (albeit quietly) the Acer Chromebook R13. Unfortunately, the release of that device was met with mixed reviews as it quickly took a back seat to the later fabled Samsung Chromebook Plus/Pro and ASUS C302.

That didn’t stop Acer from giving it another go-round this year and I don’t blame them. They are, statistically speaking, the reigning king of the Chromebook world.

This year at a pre-show press conference, Acer announced a number of new products and among them was a very unexpected refresh to their ever-growing Chromebook 15 lineup. To be completely honest, the new Acer Chromebook 15 caught me completely off guard.

The latest iteration of the Acer Chromebook 15 will feature an aluminum top and cover, updated port layout, 1080P IPS FullHD display and a backlit keyboard. All of this will be combined with updated Intel chipsets and the existing features we know and love about the 15.6″ Acer. Here’s what we know about the latest Acer Chromebook 15:

Okay, so this looks to be shaping up to a pretty impressive Chromebook. We have long been fans of the Acer Chromebook 15 in its many forms. Personally, I have owned multiple Core I and Celeron models and they have never failed to perform. Not to mention the fact that the deck-mounted speakers are still unparalleled in the Chromebook world.

What isn’t clear from the press release is exactly which processors we will see in the new, semi-aluminum Acer 15. The announcement states:

This might be a little misleading. The “latest” available chipset from Intel is the Kaby Lake series. However, from a little research, I have yet to find a Quad-core Pentium chip in the Kaby Lake lineup.

It is more likely that we are actually looking at Apollo Lake-branded processors in the new Acer. The Pentium N4200 fits the description for the quad-core chip while the dual-core Celeron is probably the N3350 we are seeing in the latest Educational Chromebooks hitting the market.

Another detail that has me a bit confused is the HDMI port listed in the press release. If you glance over the images on Acer’s landing page, you will see that this device lacks said port. Who knows? Maybe they put it on the back (not likely) maybe the production model will add the missing output.

The announcement of the Acer Chromebook 15 came right on the heels of my plea to Acer for a refreshed version of the sleek and sexy Chromebook 14. Now, these events are most definitely unrelated but Acer has reinforced my point that a Chromebook for the masses that looks great and has all the features the average user could ever want can still cost less than $400.

The new, partially aluminum Acer Chromebook 15 comes in full pound lighter than its plastic predecessors and shaves almost a quarter of an inch from the overall height of the device. It even throws in a backlit keyboard, a feature Samsung left of the Pro/Plus for reasons beyond me. This puts the Acer Chromebook 15 in the aesthetic realm of laptops like the last-gen MacBook Pro. 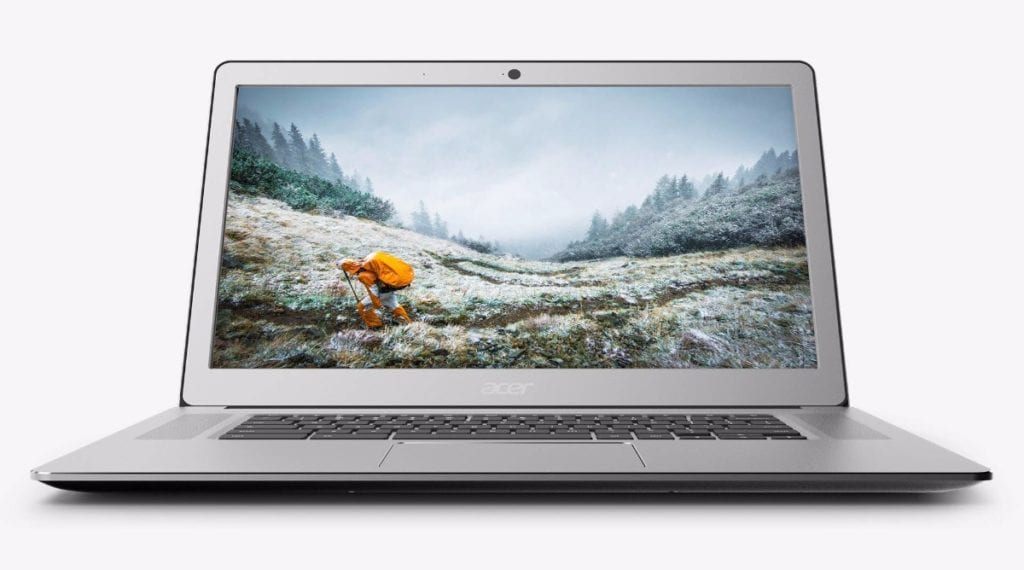 Thank you for proving my point Acer and thanks for this new device. I will be buying one just because it looks great and will make a nice stationary addition to my workspace.

The Acer Chromebook 15 is scheduled for release in October in the United States as well as EMEA(Europe, Middle East and Africa) and will be available initially from the Acer Store and Best Buy.