You are here: Home / All Stories / Unexpectedly Signed Out Of Your Chromebook, Google Home, or Google Wifi? Google is Sorry.

A few days ago, many of my daily devices all signed themselves out, leaving me with a Google Home, Google Wifi, and a few Chromebooks that were not behaving as expected.

It started at work with my Chromebox and Chromebook asking me to sign in again. I’ve had that happen a few times here and there, so I wasn’t very concerned.

Once I got home, however, things got strange.

First, upon entering the house and at the request of my 2-year-old son, I asked Google what the weather would be tomorrow.

The response was simple: sign in via the Home app.

So I went to do so, and realized my Google Wifi wasn’t working either. I unplugged the modem and router, waited a minute, plugged everything back in, and got nothing.

So, launching the Google Wifi app, I saw that my Wifi unit needed to be set up again. After that setup, I had to reset my Home unit and set it up.

Honestly, I needed to rename my Google Wifi SSID, so I took the opportunity to do so and get all the connected stuff in the house back online. Quick tip: if this happened to you, you could always keep the same SSID and password on your Google Wifi when you set it up again.

But I was a bit concerned

But I’d not been alerted to any issue with my account. Was I hacked? Was someone in my account?

Turns out, Google’s account servers just got screwy. Check out the email they sent out as an apology. I’ve never seen anything officially apologizing for an account issue from Google before, so I thought that was a nice touch. 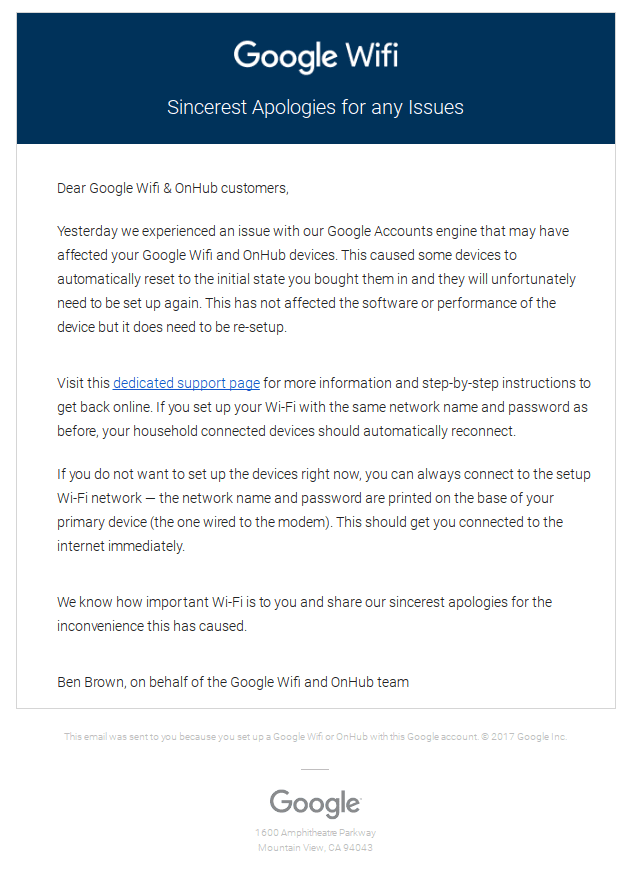 This was a bit of a tough reminder that many of us have much riding on Google’s ability to keep their servers up and running and our accounts secure. More than anything they can do as a business, keeping our data secure and in its place should always remain of prime importance.

After all, our data is the main thing that keeps the search giant running. Hopefully everything is well and we don’t see this issue crop up again any time soon.

But, we wanted to give you some assurance that things are OK with your accounts, even if the outage was a bit of a pain in the rear.