You are here: Home / All Stories / Samsung Chromebook Plus Review 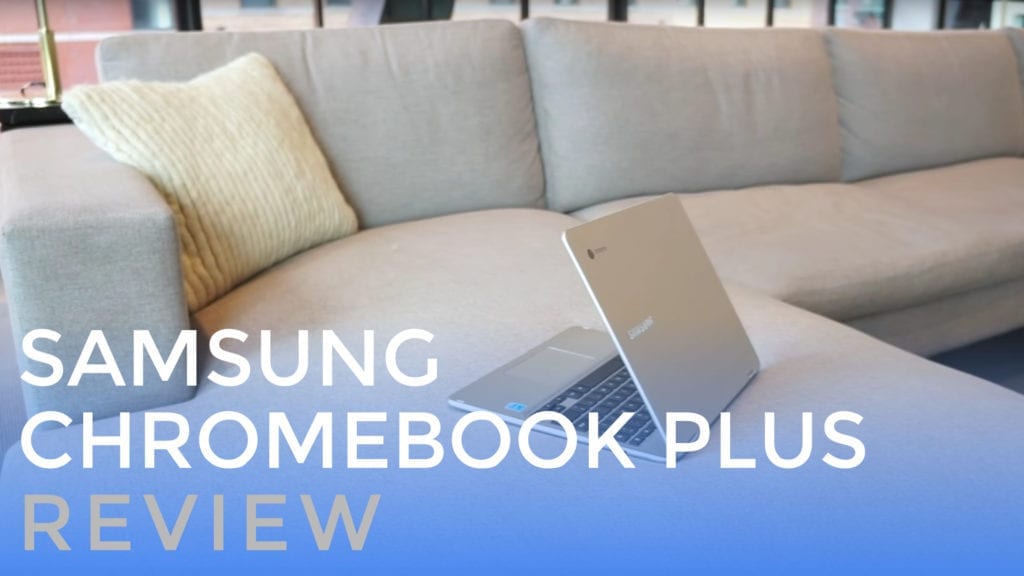 The Samsung Chromebook Plus is here and we’ve had some real-world time to spend with it both for work and for play.

How does it get along?

Before we begin, this review will be VERY different than most. Mainly, because 90% of this device has already been reviewed and broken down in fullness right over here in our Samsung Chromebook Pro review.

Here’s the deal: Samsung released the Samsung Chromebook Plus on the world on February 12th, but gave tech reviewers (like us) an early peek at the Chromebook Pro in January.

This presented a bit of an interesting conundrum, because the device available now is not the device we reviewed.

But it kinda is.

In a nutshell, the two devices are completely identical. Same chassis, keyboard, trackpad, screen, speakers, internal storage, RAM, etc. All the same on both.

So, in essence, we’ve already reviewed most of this device. And, again, you can check that out in our full review of the Pro.

So What Are We Doing Here, Then?

That’s a fair question. Regardless, many readers are requesting a review of this device. So, instead of restating all the things we did in the Chromebook Pro review, we simply hope you will pause here and go watch/read that review.

Seriously, go do that and come back. Or watch it right here if you aren’t the reading type.

Now, we need to talk about the one, important difference between the two.

In the Samsung Chromebook Plus, we are working with what Samsung is calling an OP1 ARM chip (we all know it is the Rockchip RK339, but it’s not that big of a deal). What is most important here is performance vs. price.

The Plus comes in a full $100 less than the Pro, and that is a decent amount of cash to consider.

Does the ARM chip keep up well enough vs. the much faster Core m3?

The answer, from my perspective, is yes it does. The Chromebook Plus is good enough for most people.

For the folks that will use their Chromebook to browse the web, watch a few videos, shoot back some emails, etc, the Chromebook Plus is plenty machine for the job.

Sure, after a few tabs, stand-alone apps and such are all going at the same time, you’ll see some slow down and noticeable lag.

However, if you keep your resources (and expectations) in reason, the experience is pretty good. Think better than Braswell but not as good as Core M. Sure, animations will hiccup from time to time and there will be perceivable lag when typing if you have too much going on, but if kept within reason (few tabs and windows open at once), the device gets along just fine.

Battery isn’t as good as I’d hoped, but not bad either. 8-10 hours is expected and realistic, but the m3 Pro was getting almost that as well. No real battery benefits in either model vs. the other.

The big divide, at least in the early days, is how well these devices handle Android Apps.

Perhaps not surprisingly, the ARM-powered Chromebook Plus did a much better with Android app support out of the gate. Sure, Intel processors can run Android apps and have been able to for some time, but Android app developers are likely way more inclined to make sure their app is smooth on ARM first as the majority of their customer base is Android phones with ARM chips.

Though less powerful overall, the Plus chews through Android apps quite well, and that may matter a lot to some of you. We’ll follow up on this with a stand-alone video with some comparisons between apps and standard Chrome OS stuff running on the Plus and Pro so you can see the difference. For the time being, just know that Android is a little better on the Plus.

But not much. Compared with the way The Verge portrayed Android apps on the Pro, this is a totally different expereince: in a good way.

Either way, do keep in mind that, for the next month or two, the Android experience is still going to be a bit of Wild Wild West. We have a pretty firm word from Google that when the Chromebook Pro becomes available in late April, Play Store support will finally be out of Beta. At that point, we can only guess at how well it will all work together.

Better than it does now, likely, but that is really only a hope. It isn’t a guarantee.

So if Android Apps are a buying decider for you, the slight edge the Plus holds in the app category may be a short-lived one.

Here’s the bottom line for many of you. If you are buying a Samsung Chromebook with Android Apps in mind right now, the Plus should be where you gravitate to. You are likely to see less issue with apps for the time being.

If you are buying it to use as a productivity machine, you may need to wait on the Pro.

The Plus is fine for casual use and Android apps. All the good stuff from the Pro is here, minus the pure muscle.

The Pro is a better Chromebook, but right now, not a better Android tablet-type device. Given the current state of Android on Chrome OS, that doesn’t sound like a big loss. But as the app experience becomes more refined, we can’t definitively say that the experience on Intel-powered devices won’t always lag behind their ARM counterparts. It’s simply unclear.

Like we said, Wild Wild West for now. And, in that climate, hopefully we’ve helped you make a choice between these two very, very similar devices.