Google’s new flagship phone, the Pixel, received quite a bit of scrutiny after its debut at the 10/4 event.

But, let’s be honest, a newly branded flagship phone from Google that’s consumer focused is going to draw critics like flies to honey.

With that being said, we’re not here to critique today. Only to fill you in on a very welcome feature that we originally thought the Pixel was lacking.

The two biggest criticisms of the Pixel, aside from price, were the lack of front-facing speakers(which it’s predecessor, the Nexus 6P has) and the complete non-mention of any type of water resistance.

The release of the iPhone 7, along with a number of other flagships, have made a big deal about dust and water resistance. More and more devices are coming with some degree of IP rating as mobile devices become more and more centric to everyday activities.

IP rating is an industry standard of what degree a device is resistant to dust, water and foreign objects. You can read all about IP ratings here.

With no mention of an IP rating at launch, the Pixel phone was presumed to not be water resistant at all.

Not a good selling point for the new #madebygoogle namesake.

However, just a day after it’s coming out party, multiple articles were published covering the fact that the Pixel phones are, in fact, rated IP53 dust and water resistant. Unfortunately, most of these article were drowned out by the landslide of critiques, opinions and speculations about Google’s new addition.

This is a pretty stout rating for any mobile device. It’s not quite the score of IP67 the iPhone 7 received, but it’s more than enough to survive an accidental dip in the sink.

We were very pleasantly surprised at the results.

You can check out the full, hour long video below. But, to sum it up, the Pixel not only survived a full hour submerged in water; its performance was almost completely unaffected. 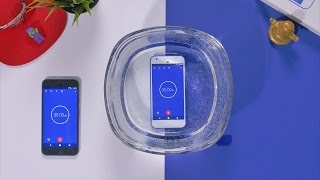 Google's new flagship phone, the Pixel, received quite a bit of scrutiny after its debut at the 10/4 event. But, let's be honest, a newly branded flagship phone from Google that's consumer focused is going to draw critics like flies to honey. With that being said, we're not here to critique today. O

The only ill effect was the speakers seemed to have been compromised. We aren’t sure if the effects were permanent. We do know the Pixel has an unusual cloth cover over to speaker bar at the top of the phone. Perhaps, after the cloth dries, the speakers will recover.

So, there you have it. The Pixel phones are IP53 dust and water resistant and have gone above and beyond in the real world testing so far.

We are now seeing these devices land in the hands of consumers and I’m happy to say there is one on its way to the Chrome Unboxed office.

Now, we know it’s not a Chromebook but Robby will be doing an unboxing and full review of the Pixel phone. Because hey, IT’S A PIXEL PHONE!

One additional feature of the Pixel phone to be happy about?

Sorry Apple. I had to.