UPDATE: The link to the bug report has been blocked after this article was published. Looks like we probably hit a bit to close to home!

We’re only 31 days out from Google’s upcoming #madebyGoogle hardware event, and though the leaks of the Pixel phones have been rampant to the point of absurdity, we’ve seen no physical leaks of any Chrome OS devices yet. Sure, we have our hunches and reasons to believe both ‘Atlas’ and ‘Nocturne’ will be showing up at the event, but all of that is based of commits and lines of code, not photos or videos.

Today we have just that.

I have a piece being prepped about mounting evidence that ‘Nocturne’s form factor could be something similar to what we see on a Surface Pro: a tablet first with a keyboard cover, magnetic clasp, and a kickstand in the keyboard case or the tablet itself.

It’s a different take on the convertible than, say, the HP Chromebook x2 with its rigid base and hinged base. One isn’t better than the other, but they are very different versions of the same detachable idea.

I’ll detail some of this in a later article and link it up once I do, but there is some good evidence that ‘Nocturne’ will be a Surface Pro type of detachable. A tablet through and through with the option of a keyboard. The reason this is important is in the video below, there are a few very important things we see that tell me we are looking at ‘Nocturne’ and one of them is the way the keyboard looks to be attached.

The video is pulled from the Chromium Bug Tracker and was spotted by Brandon Lall first. He is a fantastic source of info on Google+, so I’d recommend a follow! Thanks a ton for the tip, Brandon!

So, let’s see the video and talk a bit more. 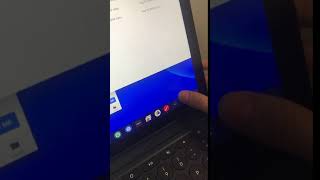 UPDATE: The link to the bug report has been blocked after this article was published. Looks like we probably hit a bit to close to home! We're only 31 days out from Google's upcoming #madebyGoogle hardware event, and though the leaks of the Pixel phones have been rampant to the point of absurdity, w

So, this isn’t a ton to look at, but a few things jump out.

First up, the round keys and the hamburger button. We’ve talked about this before, but the only Chromebooks on the market with this newer keyboard are the Pixelbooks. We’ve shown that both ‘Nocturne’ and ‘Atlas’ will be equipped with this keyboard that also includes the Assistant Key, so the inclusion of this keyboard doesn’t necessarily tell us which one this is.

As a matter of fact, ‘Cheza’ (the reference Snapdragon 845 Chromebook) is also equipping the newer keyboard, so there’s a chance this video is that device. I’m inclined not to think that is the case, however, as we have it on strong authority that we won’t be seeing Qualcomm-powered Chromebooks until 2019.

So that still leaves us with ‘Nocturne’ and ‘Atlas’, and the main reason I still think we’re looking at ‘Nocturne’ is the attachment style of the keyboard. Look closely at how it meets up with the tablet portion. Now, look at a pic of the Surface Pro.

Again, I’ll get my thoughts fully fleshed out on my arguments for a Surface Pro style keyboard on ‘Nocturne’ in the next few days, but rest assured there is some decent evidence pointing to this style.

With that in mind and the way this keyboard seems to be attached, I really think we’re getting our first look at ‘Nocturne’ in the flesh. Slim bezels, a high-res screen, and a keyboard cover with some pretty unique circular keys. We’ll continue digging around to see what else we can find, but all will be revealed in just 31 days, so we’ll all know for sure very soon. Stay tuned!