As some of you might have already seen, the HP Chromebook x2 has been spotted at a handful of Best Buys around the country and those who have pre-ordered the device are finding they have been prompted to head over to their local store and pick up the latest Chromebook on offer from HP.

Quickly following the first sighting of this yesterday, we swiftly began searching Best Buy stores in our area in an attempt to get our hands on the world’s first detachable Chromebook.

And what do you know? We found one close enough to snag it!

Due to a handful of circumstances, we didn’t have the resources to film an unboxing video, but I have everything I need to give you all a first impression of the device just 12 hours in. Don’t worry, an early impressions video will most definitely be coming within the next few days: of that you can be certain. For now, however, I wanted to give you all some words and photos to get the ball rolling on what will be a very comprehensive review process for the HP x2.

In an emerging market like Chromebooks offer, we get to experience a bunch of firsts. The first convertible, the first touchscreen, the first pen input, the first tablet, the first 3:2 screen, the first high-res screen…the list goes on and on. With this being the first detachable Chromebook, we want to spend a great deal of time talking about the HP x2 and all the pros/cons of the device so you can decide if it is the Chromebook for you.

We’ve not done this before, at least not this way. Usually, we make a video as we get the device out of the box and give our initial reactions. With this one, we want to treat it a bit differently, so I immediately began using it last night right after I retrieved it from the store. Let’s be honest, unboxings just aren’t that unique with Chromebooks. This one wasn’t any different. It was a plain brown box with some foam and clear plastic inside. We rarely see anything unique with these things unless it’s a Pixelbook. Chromebooks are utilitarian, and that is reflected quite clearly in the packaging from most manufacturers.

What’s in this basic box, however, is what really matters. Once out of the wrappings, you get a detachable Chromebook, a USB C charger (attached cable, unfortunately) and an active AES stylus with a battery. The whole thing felt well made and substantial right out of the package. Glass, aluminum, and faux leather all work quite well together. And, of course, my first action before even turning the device on was pulling the screen from the keyboard with a gentle tug. 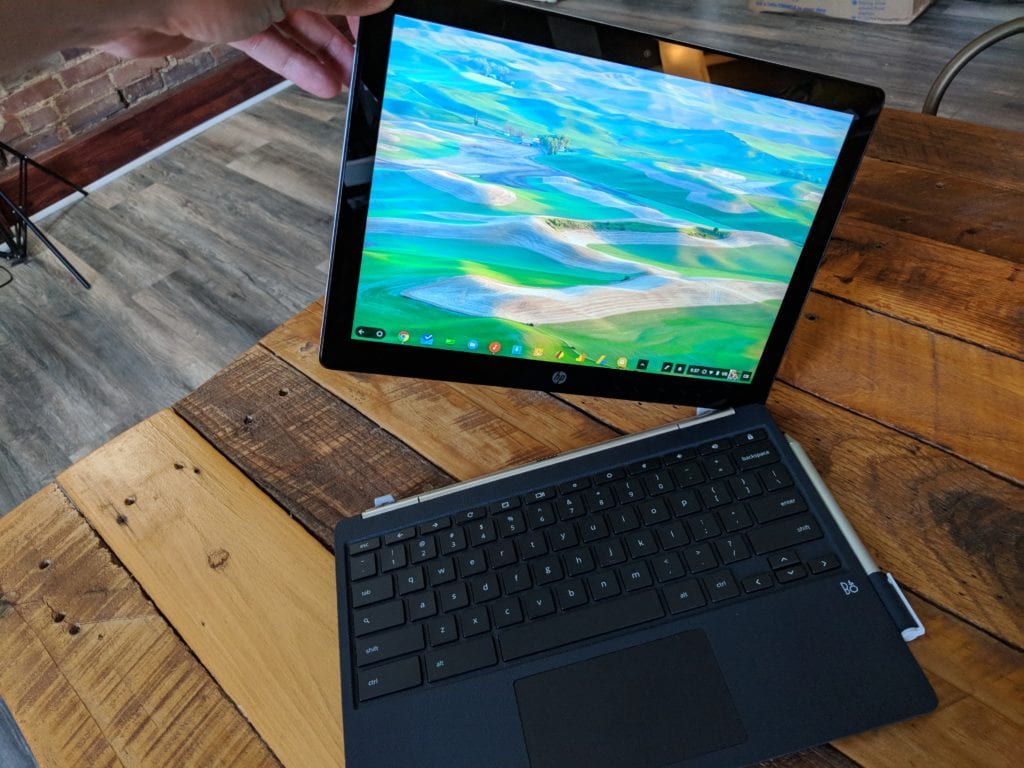 Holding the screen-only portion was insanely satisfying, but we’ll get to that.

In the car outside of Best Buy, I really didn’t want to get into the entire setup process. I simply wanted to feel the detach/attach feature, and I was immediately impressed.

Now that I’ve had the machine in front of me for about 12 hours (granted, 6 of those hours were sleep), let’s talk through the usual stuff.

I really, really like the idea of a detachable. This particular type feels like the most well-rounded version of a tablet/clamshell versus what you get with an iPad Pro or Surface Pro. I like that I get a clamshell experience when it is all together and a honest-to-goodness tablet when it isn’t. 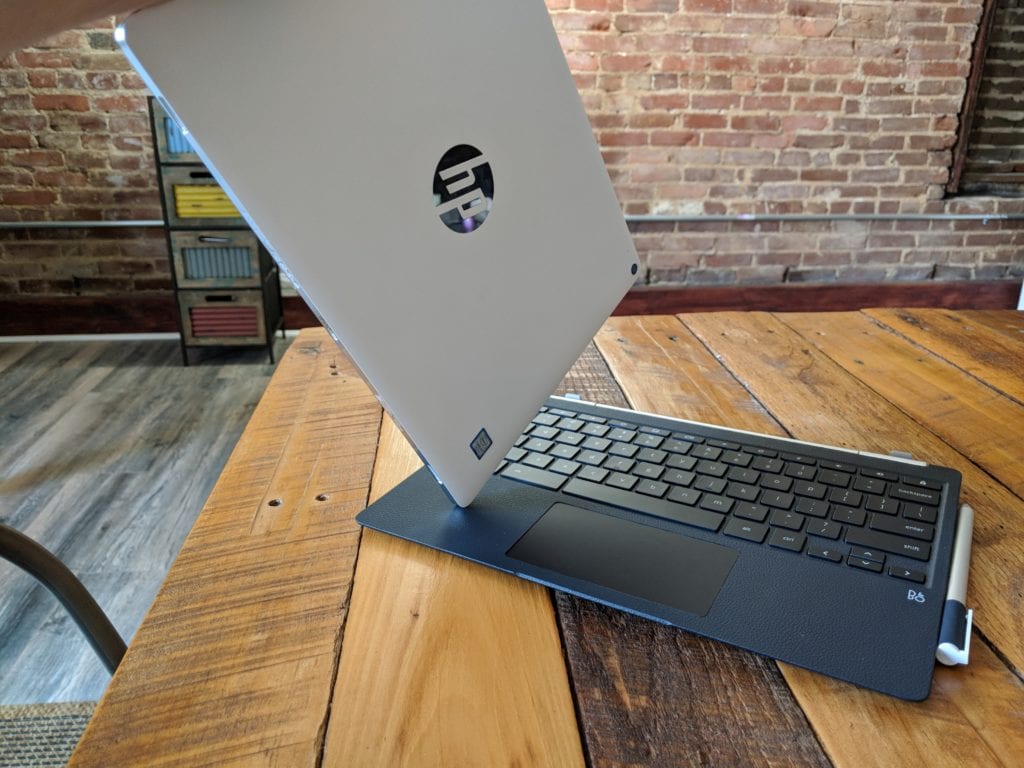 As expected, the clamshell function is a bit wobbly with all the bits and pieces behind the screen. That’s just inevitable and a trade-off with this form factor. The kickstand-toting Surface Pro (and all it’s clones) is much more sturdy on a table. In your lap, however, the HP x2 wins. Though top-heavy, it doesn’t ever feel like it is going to topple over, and that is a very, very important piece to the puzzle.

Additionally, if you want to use convertible permutations, you can yank the screen off, flip it around, and get the presentation, tent, and “tablet” modes. I put tablet in quotes since, with this device, you can just snatch the screen off and have a light, thin tablet. For those times when you have nowhere to store the keyboard, though, the “tablet” mode is quite handy.

The power button and volume buttons are in great positions as well and operate just as expected, puting the device to sleep instantly when detached as you’d expect with a tablet.

Overall, the whole thing is heavier than the Pixelbook, but when detached, the tablet portion is quite light and I was able to do some gaming for a bit quite comfortably.

No real surprises here. We’ve seen this panel on the Samsung Chromebook Plus, Pro and the Pixelbook at this point. It is 12.3-inches, 2400×1600, sharp, vibrant and maintains great viewing angles. Equally important is the 400-nit brightness that makes it workable in most environments. I’ve praised this screen in the past and that just continues on here. No gripes or complaints from me.

HP did manage to get those bezels under control, too, when compared to the Pixelbook. They aren’t what you would consider tiny, but they aren’t distracting either. They are also quite symmetric, too. The bottom bezel may be just a hair larger than the rest, but it isn’t an annoyance at all. 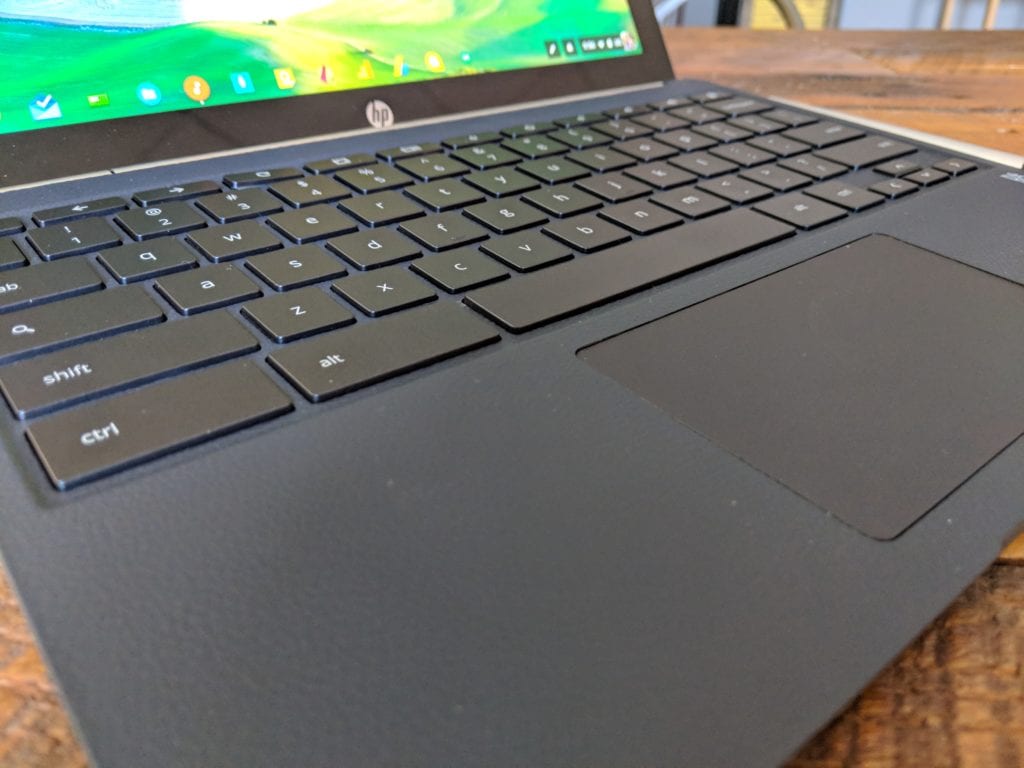 With a detachable, one of the first things I assume is that the keyboard/trackpad will both be bad. Whether it is the hollow feel of the Surface Pro’s keyboard or the afterthought quality of the ASUS Transformer’s detaching keyboard deck, I’ve just not had many good experiences with this type of input hardware.

Thankfully that isn’t the case, here. As HP frequently does, they’ve included a very nice keyboard and a fantastic trackpad on the x2. It is no Pixelbook, but it is easily my favorite keyboard/trackpad on any Chromebook not made by Google. The keys have good travel and click and the trackpad is large, smooth and quiet with a satisfying click.

I don’t ask for much from these things, but I’m constantly let down by keyboard and trackpad, so I’m very grateful this device doesn’t fall into that category.

As for the pen, it is thinner than the Pixelbook Pen, but works just as well as you’d expect. I haven’t had much time to mess with it, but it is great that it is included in the price and has a pen loop to keep it handy. It’s presence on the keyboard isn’t bothersome and, because this is a detachable, you don’t have to fool with it when you are in a tablet frame of mind. 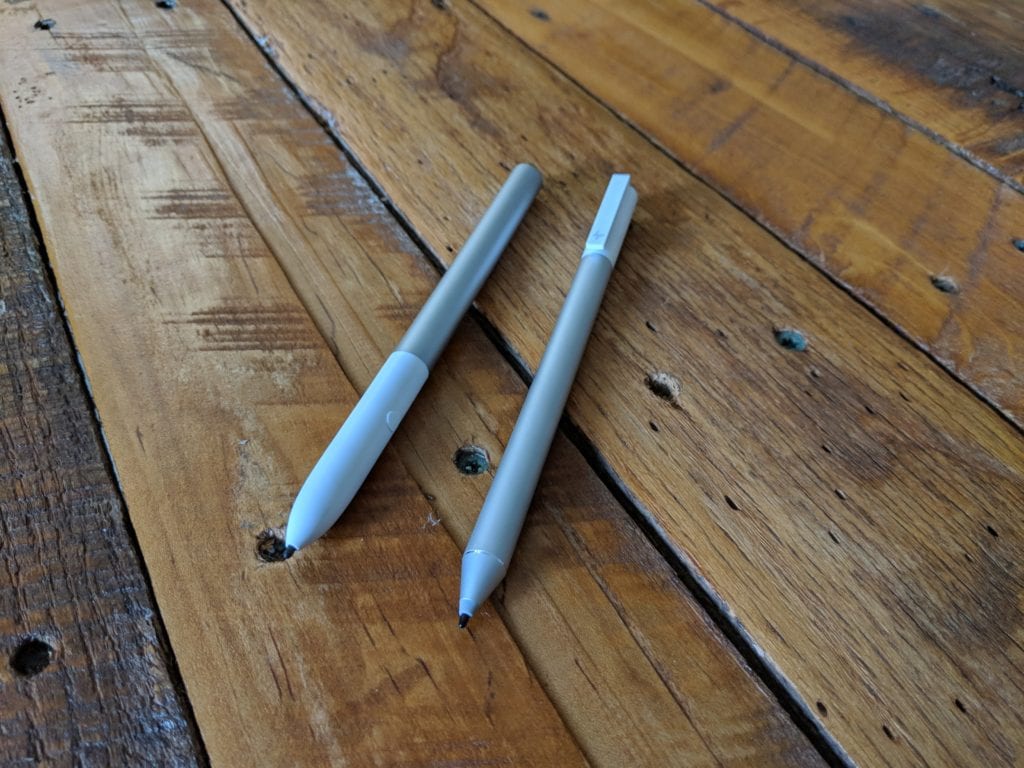 Let’s start with inputs. This one is outfitted like the Pixelbook with a USB C on both sides for power/display/data/dongles and they are positioned at the bottom (thankfully) when in clamshell mode. You also get a microSD card slot, so that is a nice add-on you miss with the Pixelbook.

The speakers are mounted in the left/right bezels, so sound comes out directly in your face. Though a bit tinny (no surprises, there), they are loud and give a decent amount of stereo separation for movies and games alike. I do wish they were a bit fuller sounding, but I’ll have more to say after I spend more time with the x2 I’m certain. 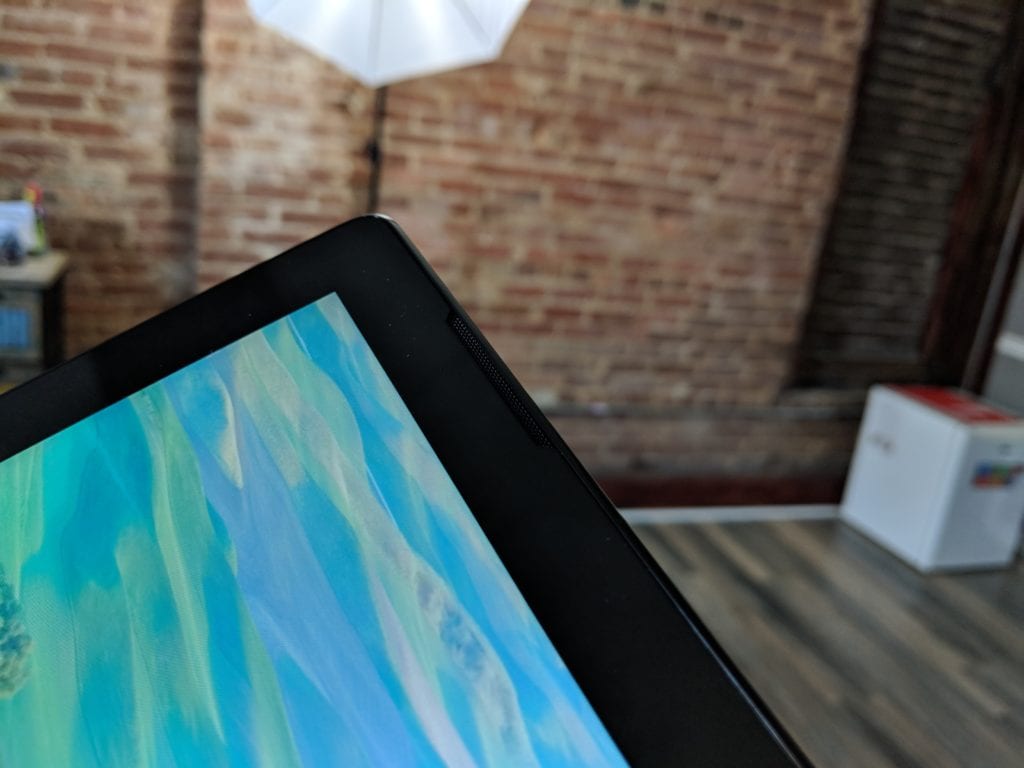 Cameras don’t usually get a passing mention from me since we usually see a 720p web cam up front and nothing more. On the HP, however, we are treated to a 5MP front-facing camera and a 13MP rear-facing camera. Those numbers sound nice, and I really wish I had a decent way to test them, but there’s no way to really do that yet. Google’s pathetic Chrome OS camera remains a terrible and pitiful piece of software that basically makes any camera look like garbage. I tried a few Android camera apps, but the shutter speed was so slow, the whole experience is useless.

Here’s hoping some sort of solution comes out soon to take advantage of these newer Chromebooks with much better cameras. For now, don’t count on this to capture anything worth keeping.

This has been one of the biggest surprises so far. Running a quick Octane benchmark, we’re getting almost 25,000! With a 7th-gen Kaby Lake Core m3 processor, I wasn’t expecting that type of speed. We haven’t really tested this chip at all, and I’m shocked at the performance. As there will be an i5 variant of the device, the question will come up whether or not the upgrade is necessary.

It remains to be seen if the 4GB of RAM will keep up with my daily use patterns, but that will be for the review. Compared to the 6th-gen m3 in the Samsung Chromebook Pro, however, the 7th-gen chip is miles ahead. So far I’ve not encountered a single stutter or lag whatsoever. We are early, sure, but color me impressed.

So, for $599 I’m already comfortable saying this is going to be a great value in the Chromebook market. There are a few things I don’t love at this point, though.

I heard some distortion in the speakers at about 70% volume on certain tracks. Games and videos didn’t see to do this, but music tracks were showing sign of distortion. Perhaps some finer tuning on the EQ can help that out.

Though listed by HP as a backlit keyboard, by backlighting either isn’t present or isn’t working. I’m not sure which it is. I’ll likely need to wait until after the true release date to get support on this, but I’d love to know whether this is a faulty unit or if some models don’t have backlighting.

The magnet attachment for the keyboard is strong, but can pull the screen into an awkward place, not seated fully. No detachable is perfect, but I miss quite a bit when trying to put things back together. I like that there is no button or mechanism, but the click together is nowhere near as satisfying as the Surface Pro.

That’s really all for now. Without even a full day behind me, it is hard to fully review a device like this. I hope these first thoughts are enough to answer some early quesitons that we’ll surely get to in the full review. We’ll get that hands-on impressions video out soon as well.