You are here: Home / All Stories / Hangouts Disabled In Favor of Allo on Pixel Phones: Writing On The Wall

According to a screenshot from a trusted source and reports around the web, it looks like Google is disabling the Hangouts app in favor of it’s new Allo app on the upcoming Pixel phones.

For all Hangouts users, the writing is on the wall. 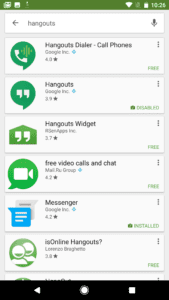 To be fair, Hangouts can apparently be re-enabled and used alongside Allo, but this type of move is a pretty clear sign that Google is transitioning to Allo and Duo as the go-to solution for messaging on their phones.

The Apps Are Actually Good

Personally, I like both apps and don’t really care that they do different parts of what Hangouts did in a single app. The basics are there and should get better over time. The barrier to entry for both Allo and Duo is small and users can get up and running quickly.

On a phone, the pair should do just fine for Google messaging standards. And from a user number standpoint, that standard isn’t that high.

If we’re being honest, messaging is a place where Google hasn’t exactly been killing it. Allo and Duo may change that, but I’m not sold just yet.

Hangouts was Google’s last stab at an all-in-one messaging solution.

Hangouts became, on purpose, the defacto standard for messaging with Google. Sure it had issues and maybe tried to do too much, but it has been everywhere for years. It’s ingrained throughout multiple Google services, in phones, and on desktops.

And that’s my pain point with Allo and Duo.

What About Desktop and Secondary Devices?

I use Hangouts on my Chrome OS devices all the time. Work and play, business and personal, I use Hangouts mainly because people are there and the app is available across every device I own. The transition between my phone, tablet, Chromebook or Chromebox (sub in Windows or MacOS device if that helps you relate) is seamless. It simply works.

Now Google is pushing a messaging setup alongside Hangouts that has no desktop interface. Duo doesn’t have the ability to be on multiple devices, either. Quick chat from the desktop while working? Simple video chat to show a co-worker a current project?

Allo and Duo don’t do that. At least not for the foreseeable future. And that’s an issue for many folks, I’d think.

Guess where the majority of Google’s user base is? Gmail.

Gmail is one of Google’s messaging successes. It is HUGE. By default, it drives tons of Hangouts usage. Allo and Duo are standalone. They can have all the best features and interfaces, but without users, they are literally pointless.

With all the options out there, how will Google drive users to their apps? That I don’t know. What I do know is where Hangouts failed as a catchy, social messenger, it wins as a great utility. People are on it or have access to it because of it’s integration with Gmail. And, just like any messaging platform, I’ve had to ask friends and family to install and use it alongside whatever other apps they use for messaging.

Messaging apps always require this. They always require an ask. And, honestly, I don’t mind doing that as long as the service does what I need it to. Facebook messenger, Hangouts, WhatsApp, iMessage and Facetime have web/desktop/tablet interfaces. I can transition to any device easily.

If Allo and Duo are to succeed, they need to do the same. If Google could simply say ‘Yes but not yet’, I think it would make all this an easier pill to swallow.

As it stands, Google’s messaging solutions are a bit of a mess right now, and that is unfortunate. As a Hangouts proponent, I’ll be rooting for it to continue as long as it exists, but I’m realistic that its time may soon be approaching its end.