You are here: Home / Deals / Google Home Deal on Ebay Makes Radio Waves: Why It Matters This morning, on my way to the office, a bizarre thing happened: I actually listened to a radio ad.

Most radio stations, even the big ones, run tons of localized ads. In the radio space, local ads make sense and drive the market. Only, most local ads are poorly produced and a bit laughable at times.

I honestly zone out.

This one caught my ear, though. It was an anti-Prime Day ad and the plot of the 30-second story was clear. You are someone who just ordered a new smart speaker from a Prime deal and as you begin unpacking your new delivery, it strikes you that you never thought to check Ebay. And what you missed was what you spent way more on over at Amazon. 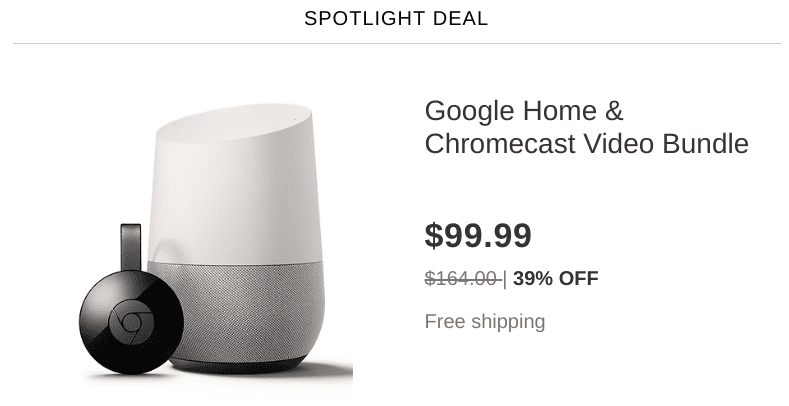 It was a fun and well-produced ad spot, but that’s not what struck me. Instead, it hit me that I’ve never heard an Ebay ad on the radio. Not one time, ever.

Granted, Ebay is pushing this anti-Prime Day stuff all over the place, but I never thought syndicated radio would be a target. When money starts to flow in that direction, you can be sure a company is seriously invested.

And in that investment, what item/deal did they choose to highlight? Google Home.

It Seems Google Home Has Arrived

I don’t know about you, but this is a far cry from 9 months ago when the mention of Google Home would only elicit confusion from most people. Instead, we have an ad being syndicated across the country for a monolithic online retailer that is using Google Home as the feature draw. 6 months ago, there’s no way Google Home could have been a poster child for this campaign.

It seems like just yesterday we were comparing Google Home to Amazon Echo just to show it had some cool tricks up its sleeve. With Amazon’s smart speaker being so pervasive already, it felt like Google’s climb to public awareness would take substantial time.

Only now it feels like there is parity between the devices from a general consumer’s standpoint.


Still A Technical Ways To Go

I know, I know, Alexa can still do lots more stuff than Google Assistant. That’s not my point, here. My point is people buy what they are familiar with. Mindshare matters. And faster than I thought possible, Google Home is capturing mindshare.

I think we may be at the beginning of a very interesting, very lengthy war. Amazon has doubled-down with Alexa, pushing more and more hardware out the door to strengthen its lead. You can now have Alexa on multiple pieces of hardware in you home.

It will be Google’s move now. How will they react? Is there a newer, more feature-filled Google Home in the works? Likely, we’ll start seeing/hearing murmurs of it soon if a fall launch is going to be a reality. Then again, this is Google, and they seldom play by the rules. We all expect another event like last year’s 10/4 launch, but no one really has proof of that.

As I said, this digital assistant war is just getting started. Grab a seat and watch the fireworks.