You are here: Home / All Stories / ‘Fievel’, Chrome OS and the Internet of Things 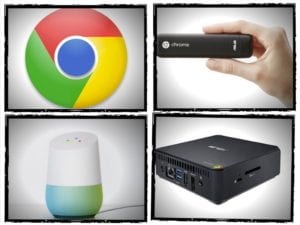 Last week we reported on what a looks to be a new Chromebox in the works. ‘Fievel’ appears to be a Rockchip device powered by the RK3288 ARM® SoC. This is the same chip that powers products like the ASUS Flip, Chromebit, Haier Chromebook 11 and a plethora of Android TV devices.

That’s the question I kept asking myself. My initial theory is that some OEM has decided to make an army of cheap Chrome OS machines to offer yet another alternative to the education market. While I believe this could still be a very marketable option, I now believe it’s something much bigger.

Our friend, James Welbes, from Chrome Story pointed out to me that,

it’s my opinion that a Chromebox with a low powered processor would be ideal for kiosk type applications, such as check in terminals or signage.

Google already has a small, but expanding footprint in the enterprise sector. Up unto this point, these devices have been a very niche market. Honestly, until recently, I wasn’t even aware that Google offered enterprise solutions for things like digital signage. Chrome devices for meetings, Chromebase kiosks and video conferencing have been a part of the Chrome OS environment for some time. But, their impact seems trivial at best when compared decades of Windows-based network systems.

With a firm grip on the education market, what if Google has now decided to make its mark elsewhere as well?

Google’s 10/4 event is a mere hours away and the rumors of things to come are as wide spread as you can imagine. A week ago it was Chromecast. Two weeks ago it was Andromeda. A month ago it was the new Nexus Pixel phones. Now, as the hours wind down to this “next big thing” event, many are coming to the same conclusion: It’s a hardware event that’s not really about hardware at all.

What’s in a name?

Chrome OS. Android. Andromeda. Call it what you will. What we are seeing here is Google moving in a direction that puts their products in front of the world; and I don’t mean the hardware they design. Google has always used hardware as platform for software. And now, the software is evolving and the hardware must expand to create the pedestal for what’s next.

What’s all this have to do with a mediocre Chromebox?

It’s a vessel. ‘Fievel’ may be a ho-hum device in terms of specs, but what it’s capable of in the right environment is astounding.

A few years back I managed a restaurant and our owner decided to buy an LED sign for the corner leading into the shopping center we were adjacent to. Boom! $10,000, but worth it in my opinion.

But guess what? Our Windows PC we used to run our POS systems couldn’t handle the software used to run and manage the sign. So, another $2,500 later we had a new PC and the software needed for our new toy. Now, the cost of the sign is irrelevant, but what if I had a $200 Chromebox capable of doing what the $2,500 PC did. No brainer.

Google offers a number of signage solutions including the current ASUS Cromebox. Google and Third party companies offer web applications to run the signs. All fine and well. But, what if these devices were designed specifically for this task? Or any number of tasks for that matter.

As I pondered all of this I stumbled upon this commit in the Chromium repository.

Rise Player is a software for running digital signage for Rise Vision digital signage. They currently offer a number of devices designed specifically for controlling kiosks. These devices are Windows, Ubuntu and Android based at the moment. There is an open-source project for Rise Player on Chrome OS, but no official support is offered by Rise. The commit above most likely points to official support for Rise Player on Chrome OS. That, combined with signs of low powered Chrome OS devices similar to current kiosk devices, leads me to believe that Chrome OS is finding its way into the consumer market with way more than just Chromebooks and mobile phones.

What I believe we are seeing is a shift to create a fully integrated platform for Google to inject their presence across a grand scale of computing devices, smart phones, IoT products and business solutions in one fell swoop. Google has created a new internet with the revolutionary search algorithms and the way information is delivered. I believe this is the next step in uniting all of this information. With products like Google Home, Google Assistant, and Web Bluetooth all of this endless information now can be applied in useful, everyday applications.

From home to office, classroom to the living room, Google’s “next big thing” is shaping up to be much less of “a thing” and much more of “all things”. We are very excited to see that Chrome OS is at the base of many of these things and look forward to sharing them with you.

Tomorrow’s the big day. See you then.

You can watch Google’s 10/4 event right here at Chrome Unboxed.