For reasons I really can’t explain, I was always under the assumption that the Google Play Store would roll out to Chromebooks well before Android Nougat was even considered and option.

Now, more than a year after the announcement of Android Apps on Chrome OS, it appears the stabilization of Android 7.1.1 will be a key factor in the widespread release of the Play Store.

We have received multiple reports of various devices updating to Android N on different channels. The first came from a reader who has an Acer Chromebook 14 on the Stable channel and access to the Play Store via crosh commands.

Neil F. emailed us to report the “critical update” to his Acer 14 that included the upgrade to Android N.

This evening (around 10pm GMT), I received an update that notified me that a critical Android update was being installed. Upon completion, my CB had updated to include Android 7.1.1.

As you can see in the images below, Neil is on the official Stable channel of Chrome OS and now has Android Nougat on his device. 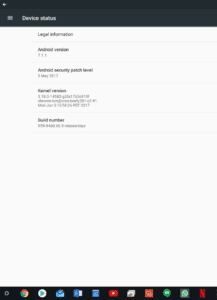 This update came four days after Chrome OS updated to version 59. This all but confirms what we have believed for months that Play Store access is moving freely between the channels and will not hinge on a specific Chrome OS release.

A second reader has reported that their ASUS Chromebook Flip C302 received a Beta update today and with it came Android N. I can also confirm the Lenovo Chromebook Flex 11 is running 7.1.1 in the Developer channel of Chrome OS.

In hindsight, it makes sense that Android N will be crucial for the full-scale release of the Play Store. App scaling and resizing are a necessity for laptop-size devices to make the best use of Android apps. Currently, the Samsung Chromebook Pro is running Nougat on the Stable channel and the user experience is leaps and bounds ahead of devices with Android 6.0.

Has your device received a “crucial update?” Drop a comment below if your Chromebook has been upgraded to Android Nougat. You can check your version by heading to settings>Play Store>manage preferences>about device.