Early on in the jam-packed Google I/O Keynote, Google CEO Sundar Pachai took a moment to highlight a feature still in development involving the Google Assistant, phone calls, and some truly mind-bending AI. The name of this initiative is Google Duplex, and it is equally amazing and scary as hell.

Let’s take a look at this whole thing in motion and talk about it for just a second. 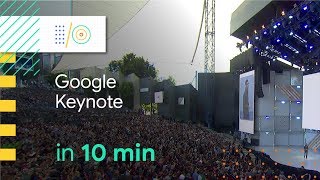 Early on in the jam-packed Google I/O Keynote, Google CEO Sundar Pachai took a moment to highlight a feature still in development involving the Google Assistant, phone calls, and some truly mind-bending AI. The name of this initiative is Google Duplex, and it is equally amazing and scary as hell. Le

This video is Google’s own 10 minute, condensed version of the entire keynote. I’ve started it at 3:10 for you so you can get right into the Google Duplex portion. Take a quick look if you haven’t yet.

Using all their investments in machine learning, AI, and voice processing, Google is able to do something with Duplex that I wouldn’t think possible just yet: give a computer the ability to functionally conversate in a way that sounds natural and human.

I’m sure if the conversation continued, things would break down, but what Google Assistant is doing in this clip is nothing short of Sci-Fi. The vocal inflections sound convincing, with the “mm-hmmm” and “um” syllables adding even more reality to the entire exchange. I’ve watched it back a few times now and am continually astounded at how life-like it comes across.

Imagine a future where Google Assistant answers your phone for you throughout the day, smartly deciding on who to patch through to you and who to take a message for. Voicemail would simply go away.

Imagine this type of conversation with your Assistant via Google Home or your phone when you need to get a few things done, fire off an email, or get up to date on a breaking story. No rigid commands, no wooden structures…just communication.

The idea of it is both tantalizing and exciting.

For all that is awesome here, there’s a part of me that is deeply shaken by it as well. Perhaps I’ve watched too much Sci-Fi. The fantastic show Humans from AMC comes to mind. In that show, the underlying question being raised is this: “What constitutes humanity? When AI becomes self-aware and conscious, does it deserve rights?” I’m not saying Duplex is at that place right now, but this much closer to that than anything I’ve ever seen.

For the first time, AI is interacting in a way that is life-like and believable and will most definitely be doing so in the future. The minute we begin having back-and-forth conversations with computers, we’ve crossed into new territory. We’ve crossed into an area where computers feel more alive. More life-like. More human.

That’s the stuff of Sci-Fi shows, movies and novels, for sure. The rate which AI is progressing and impacting fields like medicine and education is exciting and encouraging, but I think we’re closer to reality of something like “Humans” than I thought. Sure, we’re still talking years, here, but prior to yesterday I thought we were decades away.

Will we be debating rights for machines and computers before we know it? Who knows. I just hope that when the AI-powered machines do figure out that they are aware, they still see the need for all of us carbon-based lifeforms.