The end of the holiday season is rapidly approaching and, around the office, we’ve noticed a trend pop up that hasn’t been a trend before this year. It revolves around a question that we’ve been asked so regularly (in the office, via email, in chats, and in comments) that we stopped other video production and began working on a quick video in order to answer it. The question?

What’s the best cheap Chromebook I can get for my kid?

That question seems simple enough at its genesis, but if you look at the market as a whole, it becomes clear that the answer isn’t so simple to come by. There are myriads of devices from a slew of manufacturers that, from a consumer’s perspective, all tend to look like different takes on the same thing.

Throw in the fact that Intel’s naming scheme for chipsets makes it difficult to tell one Celeron from another and you have a breeding ground for massive amounts of confusion. Oh yeah, don’t forget that prices fluctuate wildly in this price range, too. And then there are the crazy sales that happen here and there, bringing other Chromebooks that weren’t in the discussion right smack dab into the fray.

I get it. It is confusing.

So, we want to try and sort this out as best we can for you. We’ve put together a video talking through all the best affordable Chromebooks in 4 categories: Build/Ruggedness, Display, Keyboard/Trackpad, and Affordability. After talking through each, we give you an overall recommendation or two in hopes that if you have this question yourself, you can make a more informed decision.

We also include a few extras at the end that tend to dip into this sub-$300 category from time to time but aren’t in that range on a daily basis. Grab one if you can! 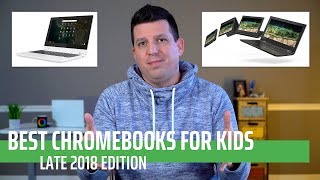 The end of the holiday season is rapidly approaching and, around the office, we've noticed a trend pop up that hasn't been a trend before this year. It revolves around a question that we've been asked so regularly (in the office, via email, in chats, and in comments) that we stopped other video prod

If you don’t have time to watch the video, here are our picks for each category and a link to snag each at the best price we’ve found.