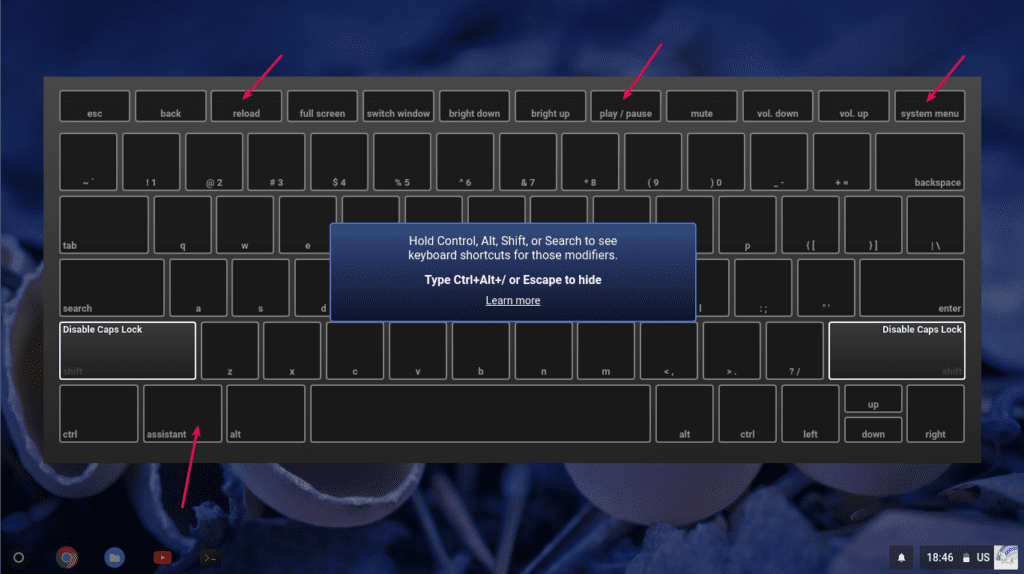 There has been a lot of talk lately surrounding some major changes coming for the Chrome OS keyboard layout.  Along with a revamped top row, the Google Assistant will be making her way to Chromebooks.

Until now, the actual layout of the updated keyboard has been a guessing game. We’ve made a conjecture about where the Assistant key may be but now, thanks to a briefly posted bug report, we see what may be the new keyboard.

A colleague sent me a link to the bug report which contained the screenshot you see above. The capture of the keyboard overlay shows the Assistant key nestled between the ctrl and alt keys left of the space bar.

The top row of the keyboard also confirms Robby’s earlier findings that pointed to the removal of the forward key as well as the addition of a play/pause key. Robby also references a new, “hamburger” key right of the vol. up key. We can now see that this could be labeled “system menu.”

From what we can gather, this new button will act to trigger the system tray of your Chromebook and possibly bring up menus when inside of applications that support the new key.

When this was shared with me, it was listed in the public Chrome Bug Tracker. Apparently, this wasn’t meant to be shared, yet. As of this morning, the link is now listed as restricted access. Private or public, I don’t suspect it will be long before we see this new keyboard layout come to Chrome OS. With any luck we will see it in the flesh in the coming months with the announcement of ‘Eve‘.

Do you like the new layout? Personally, I am excited to see this in action.