You are here: Home / Apps / How To Use Google Photos In The Chrome OS Files App This particular feature of Chrome OS has likely been around for quite some time. To be honest, I’m not sure how long users have had access to this option, but I’ve simply not known it was possible and I can’t believe I’ve not been using it this whole time!

Just the other day I was going to set a profile pic for a service of some sort (vague, right? I really don’t remember what it was for, though!) and there is a pic in my Google Photos I tend to go with when I can’t decide on a new profile photo. When I’m on my Chromebook, my normal workflow for this is to open up photos.google.com, search for the photo, download it locally, then upload it to the service.

If I were on my phone, after all, when I went to peruse my files, Google Photos would show up along with my other stuff and I could simply select the image I want right then and there instead of a local file.

Since Chrome OS is now adding Play Files and Linux Files to the files app, I thought just maybe they would include Google Photos among these add-on locations similar to what Android does.

After searching around for any sign of this happening in the future, I realized it’s been under my nose this whole time.

I did this for a bit, but all those older pics and videos were killing my Google Drive space, so I opted out of the whole sync option pretty early on and never looked back.

As it turns out, the option to make your Google Photos visible in your Drive made a return at some point (or again, has been hiding there all along) and all you need to do is flip a switch to see all your Google Photos right in your Google Drive folders. For Chromebook users, this means all your pics are sitting in a folder called – you guessed it – Google Photos and are organized in folders by year and month.

Who knew? Well, perhaps some of you did already, but I most certainly did not and finding this option isn’t exactly intuitive.

A Frequent Use Case

If you aren’t tracking with me on why this is a big deal, let me give you a simple scenario as an example. Many times for an article I will grab a snapshot on my Pixel 2 that I want to use as my featured image. Normally, I take the pic, head to photos.google.com, give it a few seconds, download the photo I just took and then re-upload to the site.

You know what would be much simpler? Taking the pic, then uploading directly from my Files app. That’s what I want to do and what I now realize I’m fully able to do. In the event you want to do this as well, let me show you how.

Get Google Photos In The Files App

This honestly couldn’t be easier. First, head over to drive.google.com. Make sure you are logged into the same Google account you use for your Google Photos. Click the gear up on the right side and select settings. Scroll down just a bit and you’ll see Create a Google Photos folder. Hit that checkbox, wait just a little bit, and you’ll have a dedicated Google Photos app right in your Google Drive sorted by year, month, and date. What that also means is Chromebook users will see the same folder right there in the Files app next time you need to upload or share a photo you recently took on your phone (assuming you are using Google Photos on your phone as well). Keep in mind, this is a 2-way street. Delete pics from these files, they will be deleted from Google Photos. Google did safeguard this in one way, however, and full folder deletions will not result in any deletions in Google Photos to save you from that sort of gut-wrencing misery.

The whole thing works so well, too! The image below of my Cubs cup was taken on my Pixel 2 and in the time it took me to place an image in this post (about 30 seconds), it was already synced up and ready for me to upload directly from my Files app. 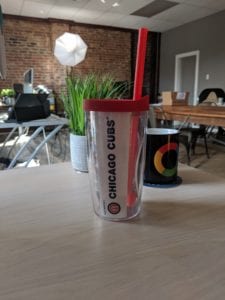 This is the workflow I’ve been after forever, and I’m so happy to share it with anyone who’s been in search of this simple, effective, and brilliant use Google Photos on a Chromebook.