Ready or not, holiday shopping season is upon us. Black Friday, Cyber Monday and month-long deals are about to be in full swing.

We’ve found some sweet deals on Chromebooks, Chromecast, surround sound and even cast-enabled TVs and we wanted to share.

If you’re looking for a dirt-cheap deal on a Chromebook that will soon support Android apps, look no further. The Samsung Chromebook 3, regularly priced at $230, will go on sale at Walmart for the crazy low price of $119!

Now, that is an amazing price. Over $100 off retail makes this a pretty sweet deal, indeed.

The Samsung 3 isn’t going to be a computing powerhouse by any stretch of the imagination. But, if you’re looking for a Chromebook you can do some light browsing on and take advantage of the Play Store, this will do the trick without making a dent in your wallet.

These guys have deals for almost all your Chrome needs.

Like many retailers, Best Buy is offering the Google Chromecast (2nd generation) for $25.

The Samsung Chromebook 3 is on sale here as well. While not the steal that Walmart is offering, at $139 it’s still a savings of $90. If you’re looking for something a little more powerful and significantly more versatile, the Acer Chromebook R11 will be a cool $199. That’s $80 off for a touchscreen convertible that already has access to the Google Play Store and over 1 million Android Apps.

The hottest Black Friday deal comes not in the form of a Chromebook but a 49″ 4K Toshiba LED TV with built-in Chromecast. The cost of 4K television has been steadily decreasing but this price is insane. That’s CRAZY for any 4K television. So, if you’re willing to camp out and fight the crowd, doors open at 5 p.m. Thanksgiving day. Good luck.

You can check out all the Holiday deals here.

This wholesale club has become a favorite of ours around the office. Our recently acquired Asus C301SA came from here and we were pleasantly surprised to find out they offer a concierge service that adds an additional year of warranty to most computing devices.

As a matter of fact, the 32GB Asus is on sale right now for $269. Not bad for a device with a premium look and a great screen. If you’re looking for some sweet sounds and built-in Google Cast, the Vizio SmartCast sound bar may be right down your alley. Starting Nov. 18th, the 5.1 channel sound system – including a wireless subwoofer – is $100 off the suggested retail of $399.

Last, but in no way least, we have an all-aluminum Acer Chromebook 14. Costco is currently selling this sleek-looking Chromebook for $294 as a combo with an included Acer mouse. 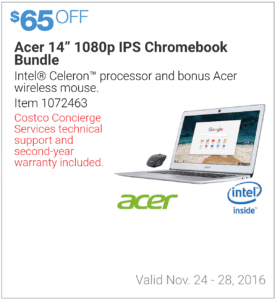 Check out the deals at Costco.

We’re keeping our eyes peeled for deals on Chromebooks and Chrome devices so we can pass them along to you. If you see one yourself drop us a line. We’d love to hear from you.