You are here: Home / All Stories / *Update* Chromebook Task Manager: CTRL+ALT+DEL, Sort Of 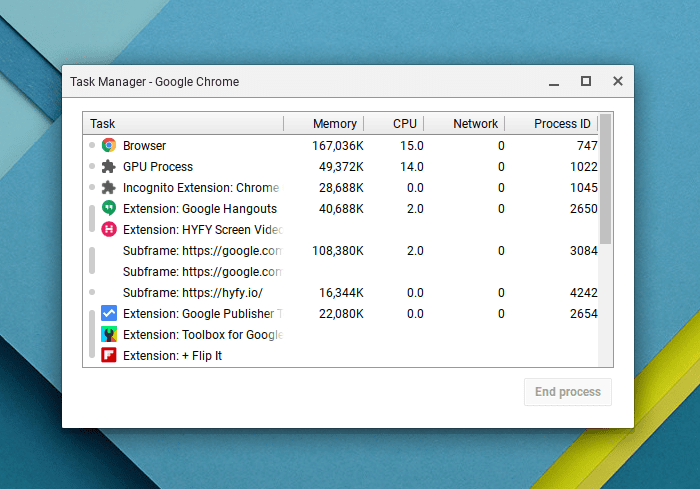 I kid about this feature all the time. Back in my Windows days it was my answer to most PC problems and since has carried over to become a bit of a running joke.

Amongst my “techie” friends, anytime someone has an issue with any type of electronic device, it’s my go to response. Phone on the fritz? Ctrl+Alt+Del. “My smart fridge stopped making ice.” “Did you try Ctrl+Alt+Del?”

“My spouse is stressing my about my Chromebook spending.” “Ctrl+Alt+Del twice and call a lawyer!” I’m kidding of course but that’s something I’d probably say.

Seriously though, what about Chrome OS? Have you ever thought to yourself, “I’d like to be able to terminate an app.” Or, maybe you’re like me and like to see what system resources are being used by what.

You’re in luck. Chromebooks do have a built-in task manager and accessing it is as simple as pressing Shift + Escape. If you’re familiar with the Windows counterpart this will all be old hat for you.

In the processes list you will see Browser right at the top. The option to end the Chrome process is unavailable. This would essentially shut down your system. Below Chrome you will see running processes and just like Windows you can select an app and force it to shut down.

This feature could be handy if you encounter a Chrome app that is hanging or you just want to see where your system resources are being allocated. Either way, it’s a great feature.

An astute reader has pointed out that this feature is now enabled by using Search+ESC. I double checked and it appears either one works for the time being.

Special thanks to Mitchel L. for the heads up.