You are here: Home / Apps / How To Set Up Fingerprint Unlock On Your Chromebook

It recently came to our attention that Samsung is now touting the ability to use the fingerprint sensor on your Galaxy phone to unlock your Windows device.

For Chromebook users, this is not a new thing at all. As a matter of fact, it’s been around for over 2 years in Chrome OS.

We talked about the overall setup before, but we wanted to bring some attention to the feature again as the majority of Android devices these days have fingerprint scanners.

Once set up, you can get started with one click on your Chromebook as long as your phone is near and unlocked.

How To Get Going

First, make sure both devices are up to date. As this feature has been around for a few years, the likelihood that your Chromebook is that far out of date is not really an issue.

Your phone, however, will need to be on Android 5.0 or later. I wish we could say that was an afterthought too, but you know how those Android updates go.

Once that’s all settled, you go through this pretty simple setup. 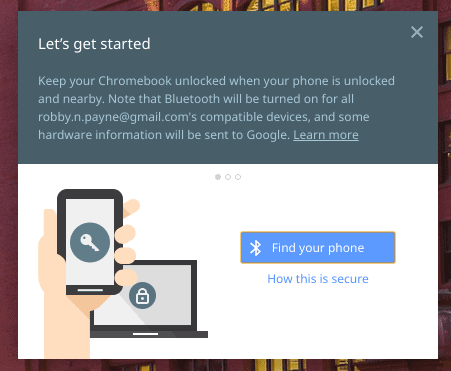 You can now unlock your Chrome OS device with a fingerprint scanner on your phone. And, though it’s been around a while, this is still a very useful and handy feature. My only wish is that it would unlock the device fully and move off the lock screen without having to click or touch on the screen after being unlocked.

However, if you have personal things up on your desktop, you wouldn’t want your Chrome OS device waking up every time you unlock your phone and are within proximity.

The better option? When Chromebooks like ‘Eve’ start hitting the market with fingerprint scanners built in, the definitive unlock method will become way more standard. Until that point, though, you can wave goodbye to passwords and PINs when it comes to unlocking your Chromebook.

SALE!! Order The Samsung Chromebook Plus On Amazon