You are here: Home / All Stories / Samsung Chromebook Pro Could Change The Consumer Chromebook Landscape

We’ve spilled much digital ink over the Samsung Chromebook Pro here at Chrome Unboxed. Being the source for all things ‘Kevin’ before ‘Kevin’ became the Chromebook Pro, we also were the starting point for the big reveal of Samsung’s next big thing in Chromebooks.

Right along with you, we are very eager to see this device finally be announced and we are now hoping to see it at CES as we will be there in early January.

If I’m honest, I’ve been holding on to this article for a little while. Since mid-October, it seemed we had a few articles a week about the Chromebook Pro and they kept coming without any real indicator of a release date.

As the weeks kept coming without any solid news, I began to sense a bit of Samsung fatigue from our readers. More and more the comments on those articles were a single, simple plea: when is it coming out???

So, for the past few weeks we’ve just let it be. We’re looking and searching all we can, but we still don’t have any firm dates. I truly think there are some reasons why Samsung is holding back, and we’ll talk about those in the context of this article. That context, in my opinion, is worth bringing this Chromebook up again even though we don’t have any more info than we did a few weeks ago.

One of the other comments I see more than others when we write or talk about the Samsung Chromebook Pro (or multiple other coming devices, for that matter) goes something like this: From Facebook to Twitter to Google Plus to our site, this type of comment persists. People are clearly waiting on this device. They want what Samsung is offering.

But, what is it about this device that is causing people to set their sights on it?

The processor is untested, the RAM is pedestrian (plenty, in my opinion, but nothing amazing), the storage is similar to other devices, and it is a convertible like almost every other Chromebook coming out soon.

Is it the sleek design? The PEN input? 3:2 screen?

Those things look great, honestly, but what is it about this one that is making so many say “I want THAT one”?

While there’s no definitive answer here, I think it is very fair to say that Samsung has hit something here with consumers. Not unlike where Google’s focus is right now, the Samsung Chromebook Pro seems aimed squarely at the consumer market.

When you look at pics of this Chromebook, what do you see? Tons of influence from Samsung’s wildly successful Galaxy phone line. Thinness. High quality display. Decent price. PEN support. Before the Note 7 debacle, the Galaxy Note line was easily one of the most popular smartphones on offer. There are still people that would carry one regardless of the explosive potential if it didn’t cause them headaches on airlines and stunted update cycles. Seems silly to me, but people love the Note line. There’s no questioning that.

And in the same way, Samsung has put together the right pieces in the Chromebook Pro to make people see it and instantly want it.

Apart from the looks, this is also a device that looks like it might actually be a fantastic tablet replacement. Sleek enough and armed with Android apps, this thing looks like a mobile warrior ready for almost any task. That is attractive.

For many folks, a Chromebook as a laptop replacement isn’t feasible just yet. For many people (including me and my family), a Chromebook is all they need. But to expect general consumers to make that leap isn’t realistic. A tablet-type device, though? Lots of people can make that purchase and quickly find that a Chromebook can be their primary computing device.

This puts it in a category not-yet broached in the Chromebook market. Sure, we have the Flip, but it really feels like a small laptop that can be used like a tablet. Samsung’s offering instead looks to be more tablet with an attached keyboard.

Here’s Where It Changes Things

So, we’ve established consumer desire and new use cases. We’ve quickly discussed what makes this device so attractive.

But those things only serve to get this thing in the hands of consumers. But a well-received Chromebook doesn’t necessarily change things for Chromebooks, does it?

I don’t think so. Not by itself, anyway. Look at the HP Chromebook 13 G1. Fantastic device and very good even at the base $499 price. Fast, great screen, sleek, attractive.

Well, without access to Andoid apps out of the box, lack of a touch screen, and a laptop-only form factor, this thing is clearly not aimed at the same crowd as the Samsung Chromebook Pro. That’s not a bad thing. I love my HP and am typing this article on it right now. But when this device came out, little to no marketing dollars were spent in its promotion. Getting it was difficult for well over a month. And upper-spec’d models were outrageously priced.

It has quietly done well for itself, but the HP will never see commercial success.

The same could be said of the Nexus 6P. I think it is the best Nexus ever made. I’ve had all of them, save the Nexus One, and it is one of the best phones I’ve ever had. It had all the parts to make a fantastic commercial success. But it didn’t have the marketing behind it. Thus, most people still don’t even know what a Nexus is when they see my phone. After 6 years of Nexus phones, the marketing model was too confusing for most consumers to grasp, so it never became a real commercial success.

The Chromebook Pro skirts both of these pitfalls, though. Samsung and marketing? Yeah, they do that really well. And the feature set of the Pro sits in the perfect spot for consumers just starting to understand and love Chromebooks. Up until now, low price and lacking features have dominated the Chromebook market.

Geared towards education, Chromebooks are just now expanding beyond the race to the bottom. We are still seeing crazy-cheap devices left and right, and I don’t think that goes anywhere any time soon.

What I see changing with the Samsung Chromebook Pro is squarely with the general consumer who walks into Best Buy to buy a Windows laptop or iPad. Imagine an end cap display with the Chromebook Pro being featured. I can see a consumer who’s never even heard of a Chromebook picking it up, admiring the thin and attractive build. 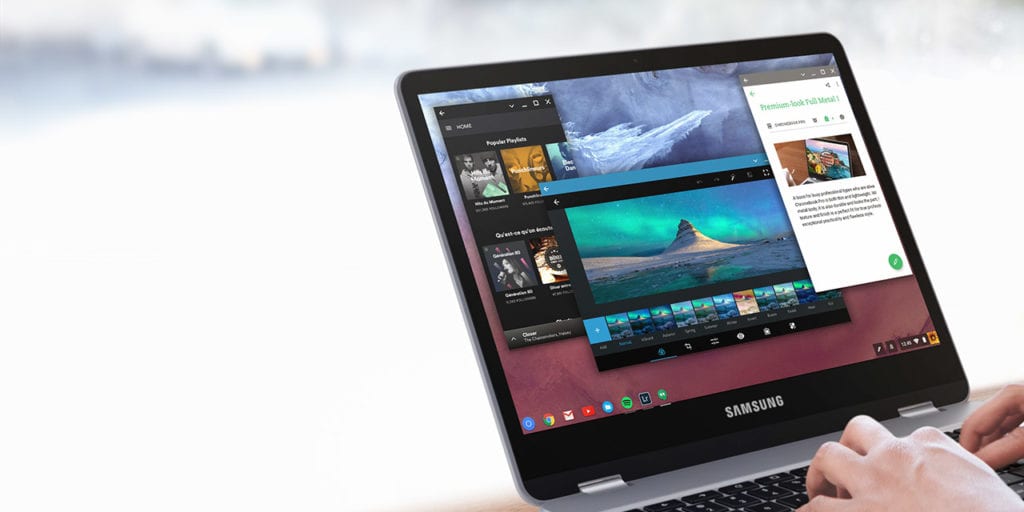 Wow, that screen is bright and crisp! Oh, look, I can take notes with this stylus that is stored right in the keyboard. Awesome, it’s thin enough and light enough to actually use as a tablet and I can bring the keyboard and trackpad up when I need to get productive. Wait, I can run all my Android apps on this thing, too? $499? Hmmm. Maybe this would work better for me that that iPad. And there’s nothing in this price range this functional in a Windows PC.

Can you see that? Can you name a single other Chromebook with that sort of appeal to the mainstream user?

That’s why I think this device could substantially change things for Chromebooks. A device with mass-market appeal being marketed by one of the largest marketers in the world? I think it could drive more attention to the Chrome OS platform than any single device that has come before it.

And that is why I believe Samsung is waiting until Android is fully realized before launching. And I can’t blame them.

This isn’t a device meant for Chrome OS fans only. This device is positioned to bring a whole new crowd of users to Chromebooks, and with its form factor and consumer appeal, Android apps are a massive part of the equation. They need to work and work well when the Pro ships. No beta labels. No extra steps required. They need to just work.

Amazingly, we see this same strategy playing out with Google’s Pixel. With the fairly low popularity of the Nexus line, Google has changed only one thing to make the Pixel a real commercial success. They kept the same basic hardware/software combo (great hardware paired with a pure vision of Android), but put real marketing muscle behind it. We’ve all seen the success. The Pixel has grabbed a ton of consumer mind-share, and that is a massive feat in the smartphone market.

Yet, in a short time, they’ve done it.

And with the Samsung Chromebook Pro, I think the same formula can work. Great hardware, great software, and great marketing. It has worked in the past. It can work again.

This could be the time when Chromebooks break into the mainstream. And I can’t wait.